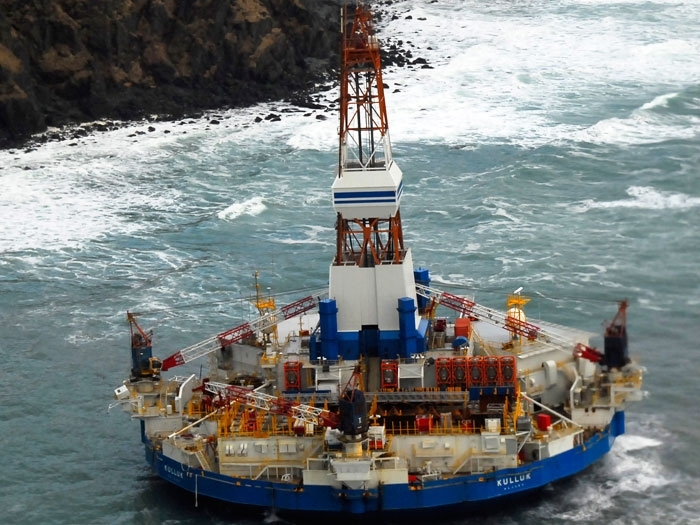 DECEMBER 9, 2014 — Noble Drilling (U.S.) LLC has been charged with environmental and maritime crimes for operating the drill ship Noble Discoverer and the drilling unit Kulluk in violation of federal law in Alaska in 2012, the U.S. Department of Justice reports.

Under the terms of a plea agreement filed in federal court yesterday, Noble will plead guilty to eight felony offenses, pay $12.2 million dollars in fines and community service payments, implement a comprehensive Environmental Compliance Plan, and will be placed on probation for four years.

The Department of Justice says that Noble Drilling (U.S.) LLC was charged in an eight-count Information with knowingly failing to maintain an accurate Oil Record Book and an accurate International Oil Pollution Prevention certificate, knowingly failing to maintain a ballast water record book, and knowingly and willfully failing to notify the U.S. Coast Guard of hazardous conditions aboard the drill ship Noble Discoverer. At the time of the offenses, the Noble Discoverer was operating under contract with Shell Offshore, Inc. and Shell Development, Ltd. for the purpose of drilling in the arctic in Alaska.

During the 2012 drilling season, Noble was the operator and bare boat charterer of the motor vessel Noble Discoverer and the drilling operator of the MODU Kulluk. The Kulluk was a conical-shaped vessel, weighing 27,968 gross tons, and measuring 265.7 feet in diameter. The Kulluk was not self-propelled, but rather had to be towed. The Noble Discoverer, a mobile drill ship, weighed approximately 15,296 gross tons, measured 572 feet long, and was propelled by a single main engine.

In 2012, the Kulluk and the Noble Discoverer made several U.S. port calls in Washington and Alaska on their way to the Shell drilling site off the coast of Alaska. After leaving the drill site, the Kulluk ultimately ran aground off the coast of Unalaska when it broke free from its tow in bad weather, and the Noble Discoverer was dead-ship towed from Dutch Harbor to Seward due to failures with its main engine and other equipment.

Under the terms of the plea agreement, Noble admits that it knowingly made false entries and failed to record its collection, transfer, storage, and disposal of oil in the Noble Discoverer’s and the Kulluk’s oil record books in 2012. Oil record book entries falsely reflected that the Noble Discoverer’s Oil Water Separator (OWS) was used during periods of time when in fact the OWS was inoperable. Under the International MARPOL protocol and the Act to Prevent Pollution from Ships, all overboard discharges must pass through an operating OWS to insure that water pumped overboard does not contain more than 15ppm of oil.

Noble also admits that it failed to log numerous transfers and storage of machinery space bilge water and waste oil and failed to log that the Noble Discoverer’s oil content meter audible alarm was nonfunctional. Noble also made modifications to the Noble Discoverer’s new OWS system after the OWS system passed inspections by the classification society and the U.S. Coast Guard.

Noble did not inform the U.S. Coast Guard or the classification society of the modifications and did not receive an International Oil Pollution Prevention certificate that documented the unapproved decanting system, the increased storage, or the new OWS piping arrangement.

Noble had problems managing the bilge and wastewater that was accumulating in the engine room spaces of the Noble Discoverer. This and other conditions led to a number of problems. Noble devised a makeshift barrel and pump system to discharge water that had entered the vessel’s engine room machinery spaces directly overboard from the Noble Discoverer without processing it through the required pollution prevention equipment as required by law. Noble failed to notify the Coast Guard about this system, and took steps to actively hide the fact that it was being used. These false and missing record entries and the use of the illegal overboard discharge system all violated the Act to Prevent Pollution from Ships.

In the factual basis of the plea agreement, Noble also admits that it negligently discharged machinery space bilge water from the Noble Discoverer into Broad Bay, Unalaska, on July 22, 2012. While anchored in Dutch Harbor, the Noble Discoverer’s bilge holding tank 27S overflowed and went overboard, creating a sheen in Broad Bay.

The Ports and Waterways Safety Act regulations require that the owner, operator, or person in charge of a vessel must immediately notify the nearest Coast Guard office whenever there is a hazardous condition, either aboard a vessel or caused by the vessel or its operation.

The Noble Discoverer was initially detained in Seward by the Officer in Charge, Marine Inspection for the Western Alaska zone, following a Coast Guard Port State Control examination on November 29, 2012.

The case was investigated by the U.S. Coast Guard Investigative Service and the U.S. Environmental Protection Agency Criminal Investigation Division and is being prosecuted by the Department of Justice’s Environmental Crimes Section and the United States Attorney’s Office for the District of Alaska.

Noble Corporation stated in a press release that it has taken responsibility for these actions and assisted in the investigation and in implementing changes in its vessel and management process.

It said that “concerns related to the Noble Discoverer have been addressed during the renovation and modernization of the rig which occurred as part of an extensive shipyard program conducted in Korea and Singapore.”

According to the Noble press release the DOJ “credited Noble’s efforts to resolve this matter, noting, ‘Noble promptly commenced an internal investigation and instituted new training of its employees across North America related to MARPOL and its International Safety Management Code. Noble also enhanced existing training programs and compliance policies, and voluntarily began the proactive implementation of a comprehensive compliance plan which will govern the conduct of its employees with respect to the safety and environmental issues raised by this investigation.’ “

Noble says that some of the mechanical and operational enhancements made to the Discoverer include:

It says that many of the company’s own initiatives were incorporated into an Environmental Compliance Program (ECP) required by the plea deal.