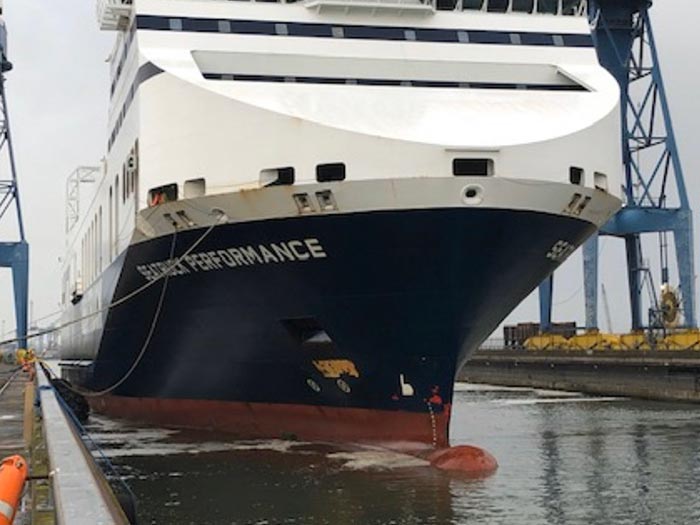 John Wood, Interim Chairman and CEO of InfraStrata, tweeted this photo of Seatruck Performance docking at Belfast shipyard on December 21

The new management team has considerable international credibility. It includes Managing Director John Petticrew, who was was most recently Vice President Operations at Seaspan Shipyard in Vancouver, B.C. Previously he was Vice President of Engineering at Seaspan, Technical Director at Gulf Marine Services and Senior Project Director for Lamprell Energy Limited (both in the U.A.E. and Newbuilding Manager at Dubai Dry Docks. He began his career in 1987, and spent a decade at Canada’s Saint John Shipbuilding, serving as Superintendent and Production Manager.

Operations Director Paul Blake was previously Head of Projects at ASRY (Arab Shipbuilding & Repair Yard) in Bahrain. Prior to that, he held the position of Project Manager at Grand Bahamas Shipyard and also held positions as Director and General Manager at Atlantic & Peninsula Pty Ltd in Australia and as General Manager/Ship Repair Director at Topaz Energy & Marine in Dubai.

Stephen Mills and Mark Giles as have been appointed Sales Directors and the company is currently finalizing the appointment of a new Commercial and Business Development Director.

Infrastrata says that the team is now installed and has commenced the business’ first contract, the docking of the Seatruck Ferries RO/RO Seatrucks Performance on December 21.

“It was a pleasure to have been in the yard this weekend to witness the first docking since we acquired the facility on December 4, 2019,” said John Wood, Interim Chairman and CEO of InfraStrata. “I am excited about the future of this iconic business and am confident that we can return the Harland & Wolff brand to its former glory.”

He said that discussions with Spanish shipbuilder, Navantia “continue to progress at pace after the execution of the Memorandum of Understanding (“MoU”) with them.”