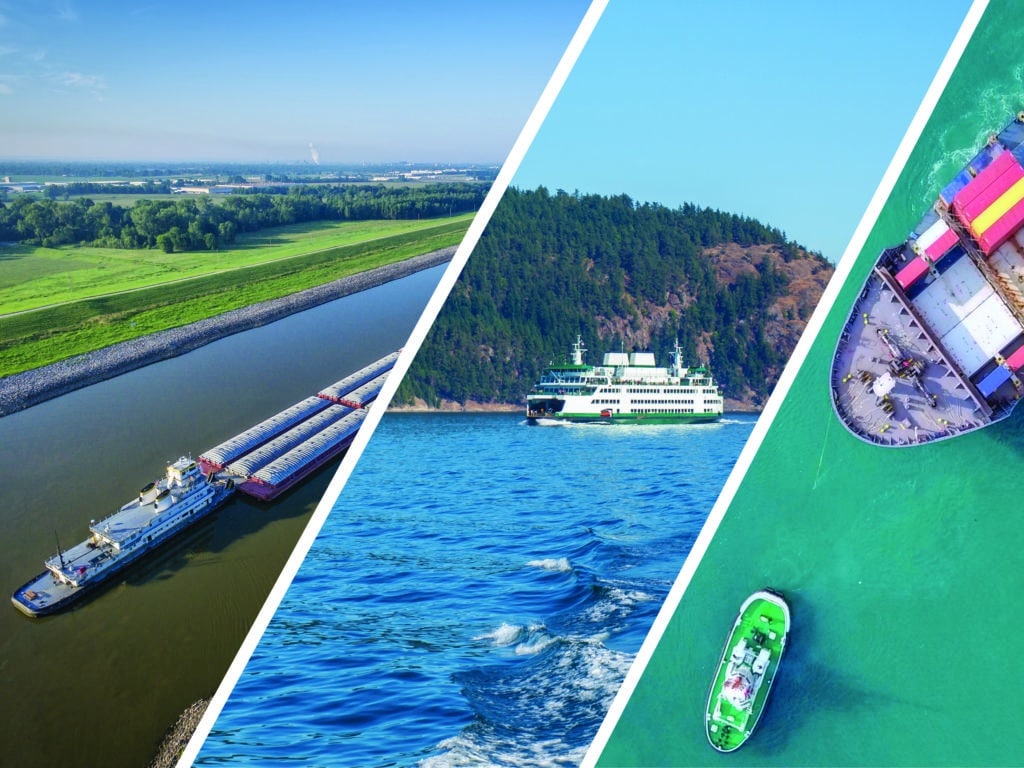 Now that we are getting settled into 2022, Marine Log has a host of new developments coming online this year—including a new conference (to be announced), more webinars focused on offshore developments and sustainability, additional podcasts and two additional digital special reports focused on power and design. But first, we wanted to introduce to our readers Marine Log’s Editorial Advisory Board.

The committee, composed of nine experts in the maritime industry, will act as points of consultation on editorial ideas, including story topics, podcasts, Q&A’s, webinars, and any other initiatives we take on. Marine Log covers the entire marine market—from towboats to tankers—and these carefully selected advisors speak directly to the diversity of the market, providing an unparalleled range of insightful perspectives and expertise.

“As Marine Log has continued to grow and expand its maritime focus, we wanted to have an editorial advisory board made up of industry presidents, CEOs and executives who can help us shine light on critical topics for our readers, event attendees and podcast and webinar listeners,” said Heather Ervin, editor in chief of Marine Log. “We are quite proud of this board and look forward to the new ideas that come from our conversations.”

She served for 13 years as a member of the congressionally authorized Towing Safety Advisory Committee. She has received two Meritorious Public Service awards and a Public Service Commendation from the U.S. Coast Guard for her contributions to the Towing Safety Advisory Committee and the Coast Guard-AWO Safety Partnership. She serves on the Board of Trustees of The Seamen’s Church Institute and the Board of Directors of the American Maritime Partnership, and serves as Chair of the AMP Offshore Wind Committee.

Kathy J. Metcalf, President and CEO of Chamber of Shipping of America:

Kathy Metcalf is president and CEO of the Chamber of Shipping of America (CSA). Prior to her appointment in 2015, she served as CSA’s director of maritime affairs from 1997 to 2015. She served in various positions in the energy industry including deck officer aboard large oceangoing tankers, marine safety and environmental director, corporate regulatory and compliance manager and state government affairs manager.

Metcalf also serves as chairperson of the International Chamber of Shipping’s Environmental Sub-Committee, serves on the ICS Maritime Law Committee, Shipping Policy Committee and Marine Committees and as CSA’s alternate to the ICS Board of Directors. Metcalf is also a member of the American Bureau of Shipping, SNAME, the Environmental Law Institute and various ad hoc government/industry work groups and task forces addressing a variety of issues impacting the maritime industry and the marine environment.

In 2018, she received the International Personality of the Year Award from the Women’s International Shipping and Trading Association (WISTA) and in 2019, received the Lloyd’s List Americas Lifetime Achievement Award. Kathy is a 1978 graduate of the U.S. Merchant Marine Academy.

Wilkins is the vice president of Canal Barge Company Inc.; the vice president of terminal operations and business development at Canal Terminal Company Inc.; and the president and vice chairman of the board for Illinois Marine Towing Inc. He also currently serves as vice chairman of the board of the American Waterways Operators, the national trade association for the inland and coastal tugboat, towboat and barge industry.

Fanberg is in his third year as president of Glosten, a naval architecture and marine engineering firm headquartered in Seattle, Wash.

A graduate of the U.S. Merchant Marine Academy, he is a professionally licensed engineer offering over 20 years of marine industry experience specializing in marine mechanical and electrical systems.

As president, Fanberg has chief responsibility for leading the path forward and setting the strategic direction for the firm. He is serving as Glosten’s sixth president since the firm’s founding in 1958.

Prior to this, Malen–Habib held the position as Resolve Marine Group’s manager of client services based in Fort Lauderdale, Fla., where she brings over 15 years’ experience in maritime emergency response and business development to the group. She has extensive experience in Emergency Response Contingency planning, compliance, Salvage, and Wreck removal projects. She comes from a family maritime background with a focus in emergency response.

She is co-founder of the first U.S. chapter of YoungShip, YoungShip Texas and is an active member of WISTA FL. Malen-Habib has been elected as the first woman on the leadership committee of the American Salvage Association, and has now been appointed its first female president. She is an adjunct member of the Maritime Law Association (MLA) and sits as vice president of the Salvage Committee of the MLA. She formally represented TITAN Salvage as their director of business development for five years inclusive of the operation of the Costa Concordia wreck removal, the largest wreck removal to date. She has been published in various maritime journals and shares the passion of her colleagues to protect our seas.

He is a mechanical engineer and has a master’s degree in engineering management.

He has also graduated in the Executive Business Administration program from IMD, Lausanne, Switzerland, and Digital Business Transformation Program from INSEAD, France apart from attending Digital Business Transformation program at University of California, Berkeley. He has been recognized as a Fellow of the Royal Institution of Naval Architects, U.K., and the Institution of Engineers Australia. He serves as a member of the board of the World Affairs Council. Antony had served in various capacities in individual development and non-governmental organizations and has a greater interest in public service.

D’Isernia was appointed president of Eastern Shipbuilding Group (ESG) in August 2015, officially becoming the second generation of leadership overseeing all company departments, the corporate management staff, and client relations for the family owned and operated business.

Prior to becoming president, D’Isernia spent more than a decade at the company serving in many vital hands-on roles, including project management, contracts administration, sales and estimating, and vice president of projects. During his tenure, he has successfully led the company to achieving some of its most significant milestones amid some of its most challenging circumstances.

He oversaw Eastern’s unprecedented rapid recovery following a direct hit from Hurricane Michael, the third strongest storm ever to make landfall on U.S. shores. During this recovery, the company also made landmark achievements in its execution of the Offshore Patrol Cutter project for the U.S. Coast Guard. Under his leadership, ESG has transformed from a strictly commercial shipyard to one that excels in the management and execution of government shipbuilding programs as well as commercial programs. Joey has been happily married to his wife, Carrie, since 2003, and they have three beautiful daughters. Joey graduated from Florida State University with a degree in finance and serves on several boards, including the Tom P. Haney Foundation and Gulf Coast Regional Medical Center.

Hurley is co-leader of the maritime litigation and arbitration team and co-chair of the Energy, Environmental & Natural Resources Industry Team at Jones Walker LLP in New Orleans. In addition to his role at Jones Walker, Grady is also current 2nd vice president of the Maritime Law Association.

Since 1979, he has focused on maritime, oilfield, and energy litigation. You can view his full bio at this link: Hurley has lectured extensively on risk management, discovery, ethics, indemnities, and admiralty and energy law, while remaining active in local and national bar associations.

He has authored numerous publications on issues such as contracts, Outer Continental Shelf jurisdiction, and regulatory matters, and is co-author of the chapter on admiralty and maritime law in the highly regarded publication, Business and Commercial Litigation in the Federal Courts, which is updated and published annually by Thomson Reuters.

As president and CEO of John P. Nadeau & Associates LLC, Nadeua is a senior maritime advisor and expert consultant to owners and operators of commercial vessels, facilities, and ports, and other maritime stakeholders.

In June 2021, he retired from the U.S. Coast Guard after 32 years of service that culminated in assignment as Commander of the Coast Guard’s Eighth District. In this role, he led over 4,500 Coast Guard personnel at 110 Sector offices, marine safety units, air stations, and small boat stations and was responsible for all Coast Guard operations in a large region spanning 26 states, including all ports and waterways along the gulf coast from the FL panhandle to the TX/MX border; the Gulf of Mexico and Outer Continental Shelf; and the Mississippi, Ohio, Missouri and associated western rivers.

Over the last three decades, he has served in a variety of roles and led diverse organizations in all aspects of marine safety, maritime security, environmental protection. He’s worked with all segments of the maritime industry and partnered with many government agencies, vessel classification societies, maritime industry trade associations, and other U.S. and international maritime stakeholders. He’s testified before Congress, led multiple U.S. delegations to the International Maritime Organization, and shaped the development, implementation, and enforcement of domestic and international marine safety, maritime security, and environmental standards.