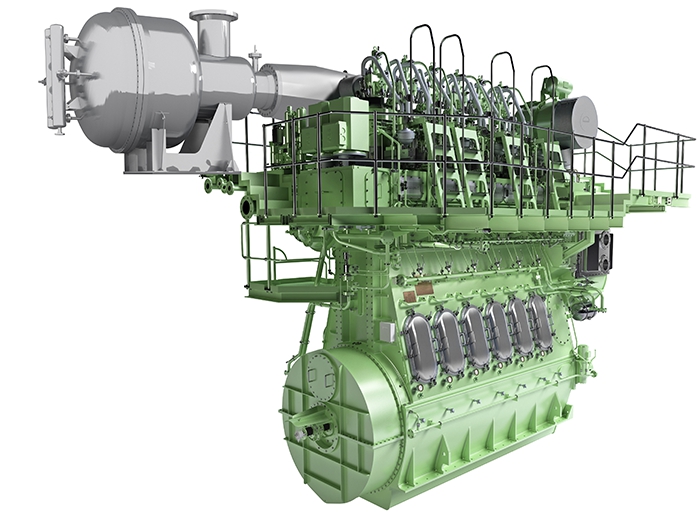 Based on a proven, four-stroke counterpart, the MAN SCR-HP is available for two-stroke engines of all bore sizes and reduces – through internal catalytic reaction – NOx exhaust emissions to IMO Tier III limits. With specially developed honeycombs and honeycomb materials, as well as an integrated mixing unit, the overall size of the reactor has been drastically reduced compared to typical market designs.

MAN Diesel & Turbo expects to deliver the first medium-speed counterpart systems from the beginning of 2018.

The new system was launched earlier this month at an event at the Tamano, Japan, facility of licensee Mitsui Engineering & Shipbuilding.

Calling development of the new SCR “an important step on the path to a more sustainable future of shipping and global trade,” Bjarne Foldager, Vice President MAN Diesel & Turbo and Head of Sales & Promotion Two-Stroke Business, said the system “offers additional choices to shipowners worldwide, who can now choose from all NOx reduction technologies and select the optimal solution for their MAN Diesel & Turbo two-stroke engines. Furthermore it strengthens our position as the world’s leading system provider in the field of marine propulsion.”

Dr. Gunnar Stiesch, Vice President MAN Diesel & Turbo and Head of Engineering Engines, said: “The successful technology transfer from medium-speed design to two-stroke is this project’s major achievement. The reactor design has been driven by the desire to reduce the SCR system’s overall size, while still maintaining the effectivity of a much larger design. Reaching this target was only possible by focusing on key cornerstones of the design – the honeycombs as well as the reactor concept. For both components, we have collaborated with worldwide stakeholders to ensure that we offer the best possible design to the market, something I’m confident we have achieved.”

The development of the SCR-HP system was based on MAN’s in-house competence with four-stroke engines, for which it can already reference more than 650,000 operating hours. The newly-developed system comes in six frame-sizes, covering up to 25 MW per reactor. A major milestone in the development of the MAN SCR-HP was reached during the approval certification and engine shop test. The test was carried out in close collaboration with MAN licensee and partner, Mitsui Engineering & Shipbuilding, at its engine works in Tamano under the observation of ClassNK.

MAN Diesel & Turbo offers two alternative methods to meet IMO Tier III NOx requirements for MAN two-stroke engines. The first, exhaust gas recirculation (EGR), is an internal engine process that prevents the formation of NOx by controlling the combustion process. The second method, selective catalytic reduction (SCR), is an after-treatment method that uses a catalyst and an additive to reduce the NOx generated by the combustion process.

After the technical presentation at the Tamano event and a demonstration of the new SCR system in operation on an engine test-bed, Ralf Klaunig, Vice President MAN Diesel & Turbo and Head of Turbocharger Sales, spoke to the audience about the product’s next steps and its timeframe for market introduction.

“The market has expected MAN to offer its own SCR system for two-stroke engines for some time now,” he said. “For us, it was clear from the start that we should focus on a high-pressure solution in order to give more flexibility to shipowners. The improved and compact design, compared to conventional reactors, leads to considerable benefits for engine builders, shipyards and shipowners.”

The SCR-HP comes in six frame sizes, covering engines up to 25 MW with one reactor for the entire exhaust stream. Larger engines will require two reactors, which can be arranged in a multi-setup similar to turbochargers.

Rendering of the SCR reactor

The SCR-HP system consists of the reactor – including mixing unit, urea injection lance, honeycombs and soot blowers – along with a module-based supply system, as well as the reactor’s control unit that communicates with the engine-control system.

The SCR-HP system is available for Scheme A and Scheme B classification approval. Scheme A approval includes a certification of the complete system on the engine test bed, SCR and original piping. Approval via Scheme B reduces complexity for all involved parties. The engine is tested in IMO Tier II mode on a test bed. MAN Diesel & Turbo then models the SCR system and calculates the Tier III mode. On the parent engine, this mode is certified on board during engine commissioning. This Scheme B approval is confirmed by several classification societies and reduces the test demands required of the engine licensee. The process is well established in MAN’s medium-speed sector, and over 100 systems are already in the order book awaiting Scheme B certification.

According to Mr. Klaunig, “the Scheme B approval will lead to remarkable cost reductions in the engine-approval procedure.”