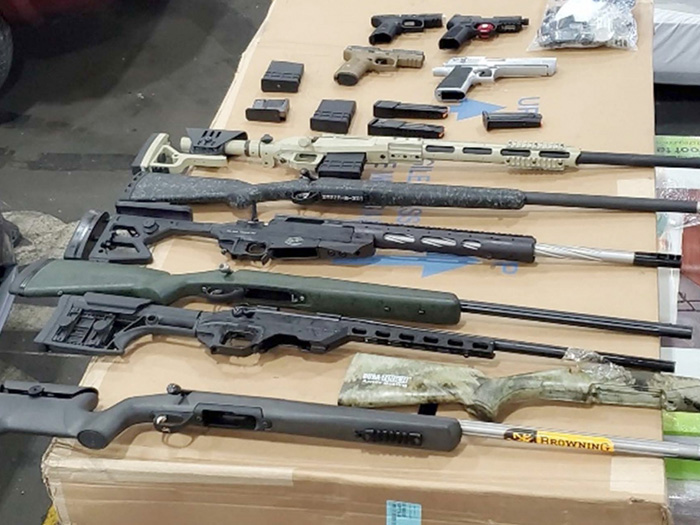 A photo introduced as evidence in the detention hearing for Nihad Al Jaberi includes nine firearms from a shipment interdicted in the Port of Savannah and reassembled, along with other firearms removed during a search of the defendant’s residence.

An Iraqi national has appeared in U.S. District Court in Savannah. Ga., after his indictment on charges related to the attempted smuggling of firearms to Iraq.

The U.S. Attorney’s Office for the Southern District of Georgia says that Nihad Al Jaberi, 41, a Clarkston, Ga., resident, is charged with Smuggling, Failure to Notify a Common Carrier, and Submitting False or Misleading Export Information.

The smuggling charge carries upon conviction a penalty of up to 10 years in prison and substantial financial penalties. There is no parole in the federal system.

Al Jaberi previously was ordered detained after a hearing in U.S. District Court in the Northern District of Georgia.

As described in court documents and testimony, Al Jaberi is charged with attempting in August 2020 to export three handguns and six .308-caliber long-range rifles in a shipment in which the contents were listed as “71 Pieces of Spare Auto Parts with No License Required.”

The firearms, which were discovered disassembled along with used auto parts in a container at the Port of Savannah, had been obtained through straw purchases at various Atlanta-area sporting goods stores.