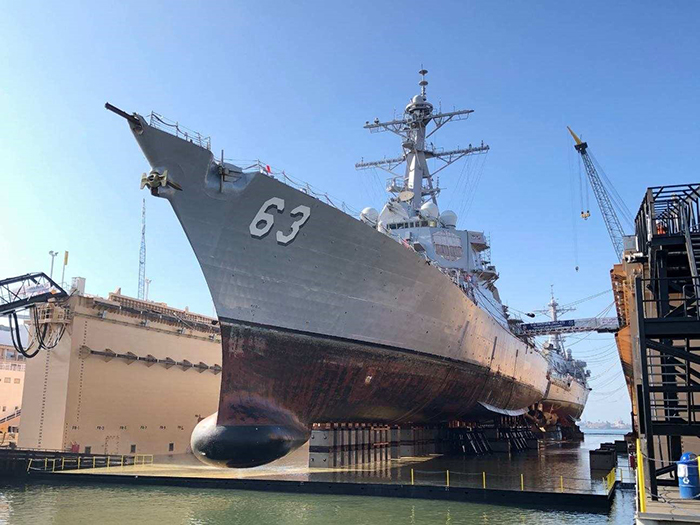 A report from the U.S. Government Accountability Office finds that since shifting to the Multiple Award Contract-Multi Order (MAC-MO) contracting approach for ship maintenance work in 2015, the Navy has increased competition opportunities, gained flexibility to ensure quality of work, and limited cost growth, but schedule delays persist.

During this period, 21 of 41 ship maintenance periods, called availabilities, for major repair work cost less than initially estimated, and average cost growth across the 41 availabilities was 5 percent. Schedule outcomes were less positive and, says GAO, Navy regional maintenance centers varied in their performance.

To mitigate delays, the Navy has identified and taken actions to implement lessons learned, including negotiating and funding undefined but expected increases in work at the time of contract award. However, says GAO, these actions have not resolved the delays that result from the approval process the Navy often must use to obtain funds to complete this maintenance work.

GAO found this approval process took between 26 and 189 days based on Defense Department data. In December 2019, Congress established a pilot program that would potentially allow the Navy to avoid this process. Leading practices that GAO identified for pilot programs call for development of an analysis plan to track implementation and performance and for evaluating final results. As the Navy moves into implementation of its pilot program, developing an analysis plan would provide it with a means to identify opportunities to evaluate schedule outcomes of pilot program availabilities, as compared to non-pilot program availabilities, and document a process for evaluating lessons learned from the pilot program.

Ship repair contractors now operating in the MAC-MO environment told GAO that two key considerations drive their decisions on workforce and facilities investments: visibility regarding planned workloads within a given port and their assessment of the share of that work they are most likely to win. In recognition of these considerations, Navy officials have begun taking steps to increase predictability of workloads at each port. These officials anticipate that these steps, coupled with increasing workloads at the ports, will help increase contractors’ confidence in their ability to forecast their share of future work.

GAO recommends that the Navy establish an analysis plan for the evaluation of the pilot program. The Navy concurred with GAO’s recommendation.