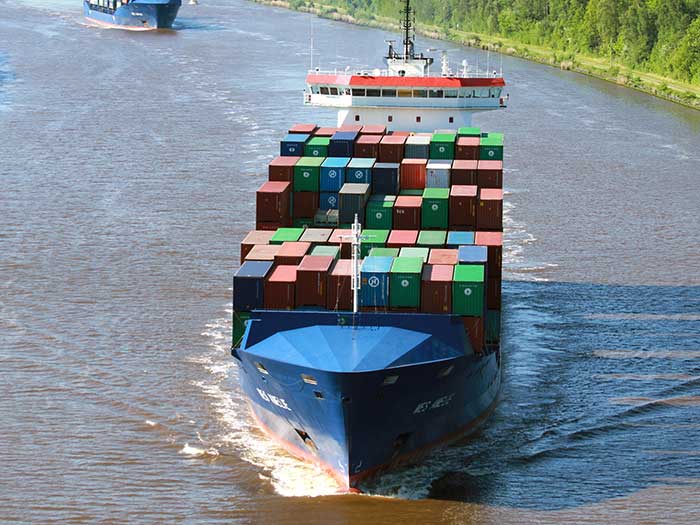 The first containership to be converted to operate on LNG is to notch up another green first, operating on liquefied SNG (Synthetic Natural Gas) produced from renewable electrical energy as drop-in fuel.

In 2017, the vessel, the 2011-built 1,036 TEU feedership Wes Amelie, was the the subject of a successful first-of-its-kind conversion of its MAN 8L48/60B main engine to a multi-fuel, four-stroke MAN 51/60DF unit that enables dual-fuel operation.

Now MAN Energy Solutions and Hamburg headquartered Wessels Marine GmbH report that, to demonstrate that SNG can successfully be used as shipping fuel, 20 of the 120 tons of LNG that the Wes Amelie typically uses per round trip will be replaced by climate-neutral SNG. As a result, CO2 emissions are expected to decline by 56 tons for this trip.

The companies are cooperating on the Wes Amelie project with Nauticor, a leading supplier of LNG as a marine fuel, and Unifeeder, the charterer of the vessel/

Automobile manufacturer Audi’s Power-to-Gas facility in Werlte, Germany, where a liquefaction plant is currently under construction, will provide the SNG, which will be generated by wind energy and will thus be 100% climate-neutral. The SNG trip will take place after the completion of the liquefaction plant in Q2 2020.

“The Wes Amelie project has always been about demonstrating the technologically doable while pointing out the regulatory actions necessary to make it possible,” said Christian Hoepfner, Managing Owner of Wessels Marine, Hamburg. “The initial retrofit to LNG took support from the German Government to be financially viable, but it was a huge success for the environment in that it drastically reduced emissions. As a consequence, there now is a retrofit program in place to make more retrofits happen.”

He continued: “In another world-first, we will now demonstrate that SNG can successfully be used to reduce harmful emissions even further as the fuel is climate-neutral. However the costs are still way too high. Going forward, governments and regulators will have to work together to make this a viable and available option for shipowners.”