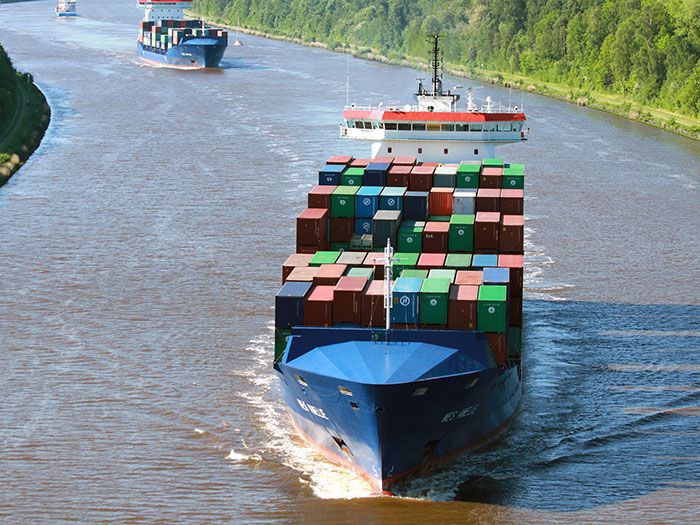 NOVEMBER 10, 2017 — Germany’s Wessels Reederei has signed a letter of intent with MAN Diesel & Turbo covering the conversion of three more of its fleet to dual-fuel gas operation.

Wessel Reederei’s 2011-built 1,036 TEU feedership Wes Amelie was the the subject of a successful first-of-its-kind conversion of its MAN 8L48/60B main engine to a multi-fuel, four-stroke MAN 51/60DF unit that enables dual-fuel operation.

Wes Amelie is now in service and operating on LNG, significantly reducing its SOx emissions by >99%, NOx by approximately 90%, and CO2 by up to 20%. The vessel now meets both the Tier II and Tier III emission requirements set by IMO.

The three ships covered by the LOI, which was signed at this week’s Europort event, are sisters to the 1,036 TEU Wes Amelie,.

Stefan Eefting, Senior Vice President, MAN Diesel & Turbo and Head of MAN PrimeServ Diesel in Augsburg, said: “The Wes Amelie project was really a pioneering moment in the European container-feeder market and shows clearly that existing MAN engines can be converted to LNG operation with a tremendous effect on exhaust emissions and the environment.”

“One of the key reasons the Wes Amelie was selected for conversion was its ‘multiplier effect,’ that is, its many sister ships that would facilitate follow-up projects at reduced costs owing to the experiences gained from the first project,” continued Mr. Eefting. “I believe the signing of this letter of intent validates our approach and points a realistic way towards decarbonization and a climate-neutral shipping industry by 2050.”

Wes Amelie has 23 sister ships, 16 of them structurally identical, allowing follow-up projects to be easily implemented, facilitating a multiplier effect.