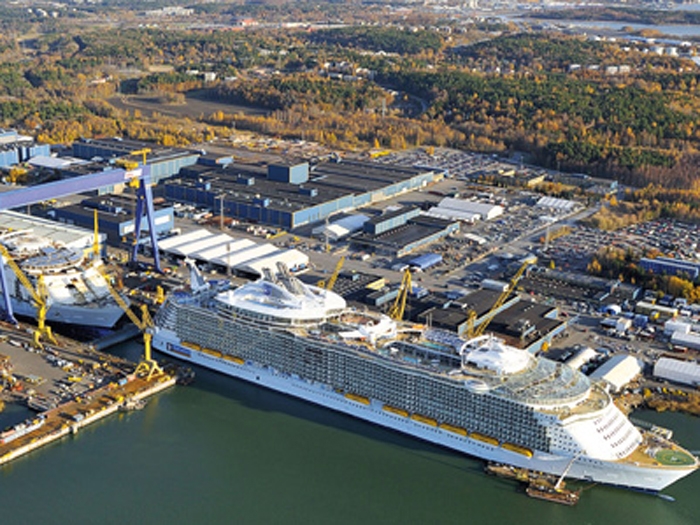 MAY 8, 2014 —The Finnish Government is considering the acquisition of the STX Finland shipyard in Turku in partnership with German shipyard Meyer Werft, Finland’s Minister of Economic Affairs, Jan Vapaavuori, said today .

He said that negotiations with the German shipbuilder started before Christmas and that STX’s Korean owners had been informed last year that the state wanted to negotiate the purchase of the shipyard.

“Negotiations are however at a preliminary stage so we cannot comment on any details at the moment,” Mr. Vapaavuori said in a statement Thursday.

“We want to communicate the strong commitment of the Government of Finland and the Germany’s Meyer Werft shipyard in this regard,” he told reporters today, according to newspaper Helsingin Sanomat. He also said that Meyer Werft would have a clear majority shareholding in any new arrangement.

One attraction for Meyer Werft is that Turku shipyard is capable of building even larger cruise ships than those it can build at its Papenburg shipyard on the Ems. That location limits Meyer to building ships that can make the Ems passage to the North Sea.

The Turku Shipyard, which has a 365 m x 85 m building dock, has no such limitations. It built the world’s two largest cruiseliners, the 6,360 passenger, 361 m x 66 m Allure of the Seas and Oasis of the Seas. The largest ships currently under construction at Meyer Werft, the Norwegian Cruise Lines Breakaway Plus vessels, are 4,200 passenger ships with dimensions of 324 m x 41.4 m.