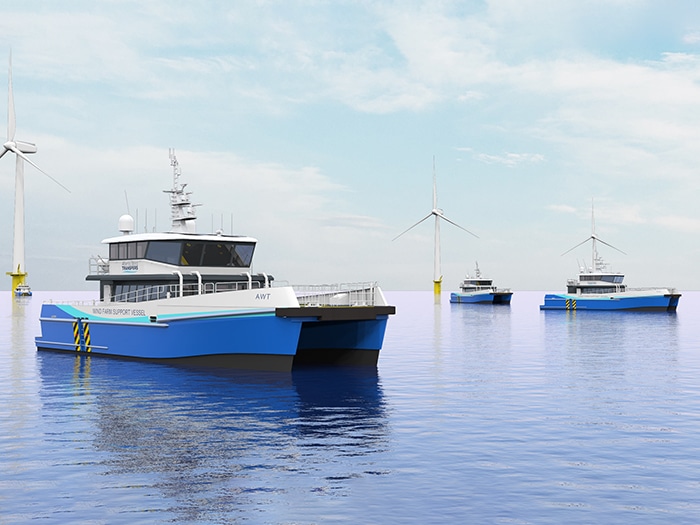 The first two are expected to be delivered in summer 2023 and January 2024 respectively, with four further builds in the pipeline.

The vessels will be the first U.S.-built CTVs to comply with the U.S. Environmental Protection Agency’s Tier 4 regulations, among the world’s most stringent emissions rules for marine engines.

The Ambitious is Southampton, U.K.-based naval architect firm Chartwell Marine’s flagship CTV design; a 25.2 meter aluminum catamaran with capacity to transport 24 personnel to and from turbines with speed, safety, and stability. Orders for the Ambitious class design are now well into double-figures, with boats currently operating in Scotland, France, and Virginia.

AWT has a relationship with Chartwell that includes taking delivery of the first U.S.-built Chartwell CTV, Atlantic Endeavor, in December 2020.

AWT says that, through its continued partnership with Chartwell Marine, it is demonstrating its commitment to the growth of the U.S offshore wind market.

The Jones-Act Compliant Chartwell Ambitious CTVs, certified under USCG Subchapter L, will be able to operate on any wind farm in the United States under the strict Safety and Inspection standards of the U.S. Coast Guard.

“We’re pleased to strengthen our pioneering status in delivering another first for the US offshore wind sector with these new Tier IV vessel orders,” said AWT’s founder, Charles A. Donadio Jr. “Our goal is to build the most reliable, multi-purpose Jones-Act CTV fleet in the U.S., and provide our clients with cutting edge technology while lowering our carbon footprint and meeting all Jones Act and USCG Regulations. This investment will enable us to have crew transfer vessels available for charter to support the demand over the next several years.”

“Our experience has proven our vessel model works for both the shipyard construction phase with on-time deliveries, and in-service uptime reliability for installation support and long-term O&M,” Donadio continued. “Chartwell is our go-to when it comes to CTV designs which are operating in multiple international markets. We see our partnership with both Chartwell and St. John’s Ship Building as a key cornerstone in our strategy to build the capability and capacity of AWT to support the future growth of the offshore wind industry.”

“The U.S. offshore wind market is expanding rapidly, and AWT’s pioneering vision to support this growth aligns well with our own ambition to bring versatile, high-performance crew transfer vessels to the markets that need them most,” said Andy Page, director and naval architect at Chartwell Marine/ With its performance and versatility, the Ambitious delivers on the needs of the growing US market.

“St. Johns Ship Building is excited to be working with Charlie Donadio and to be part of Atlantic Wind Transfers’ successful CTV operation and their extensive planned new vessel construction program,” said shipyard president Jeff Bukoski. “This effort further solidifies our position as a leading supplier of Jones Act compliant CTVs for the offshore wind industry and working with highly experienced European naval architects such as Chartwell Marine. We know that our skilled workers also appreciate the additional opportunity to showcase their high quality craftmanship and will allow continued growth and opportunity.”