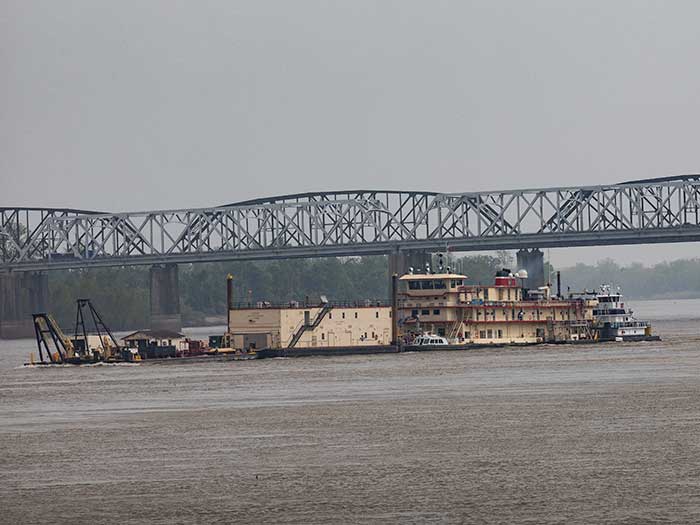 On May 3, 2021, the dredge Jadwin, with a crew of around 50 U.S. Army Corps of Engineers (USACE) Vicksburg District personnel, departed from the Vicksburg Harbor for its annual season of dredging along the Mississippi River and its tributaries. [USACE photograph]

An 88-year-old Corps of Engineers dustpan dredge, the Jadwin, departed from the Vicksburg, Miss., Harbor, May 3, for its annual season of dredging along the Mississippi River and its tributaries.

The Jadwin is classed as a dustpan dredge due to the shape of the suction/cutting head which resembles a dustpan.

That “dustpan” lowers to a specific depth on the river bottom. The water jets agitate the sediment and the dustpan vacuums up the agitated material and pumps it through the dredge and pipeline, where it is typically placed in swift water and re-suspended as it continues its journey down river. The material can also be placed in a deep location if the current is not strong enough to wash it down river.

To dredge a specific location, the Jadwin uses two 5,000-foot cables that are crisscrossed and sunk by anchors weighing 6,000 pounds each. The cables help the Jadwin to maneuver while dredging. Winches pull against anchors to advance. A dredge tender (towboat) is also used to assist in moving left and right.

There are only four dustpan dredges total in the United States, and three of those, the Jadwin, Potter, and Hurley, belong to the Corps of Engineers. The fourth dredge is owned and operated by a private contractor.

The dredge season typically begins as soon as the spring water rise is over in April or May and ends some time in November. In the off season, dredges undergo critical repairs and maintenance.

Because of back-to-back years of high water and flooding, last year’s dredging season was record-setting at 247 days.