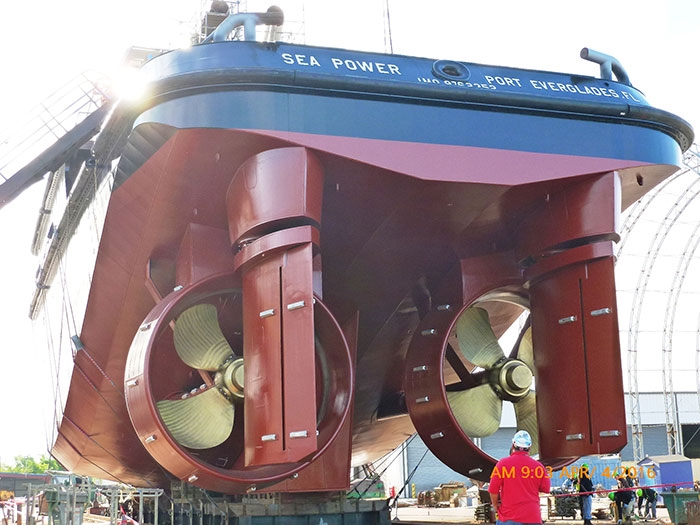 Tug is set for delivery to SEA-Vista later this summer

The ATB uses a pin connector system between the tug and the barge and fully complies with ABS under 90 m Rules, Maltese Cross A1 AMS ACCU Towing Vessel, SOLAS, USCG Subchapter I.

“We are pleased that our client selected this state of the art rudder system for their new vessel” said Arthur Dewey Vice President of SMI. “We are confident that their faith in Van der Velden rudders will be rewarded over the long haul.”

According to Van der Velden, the vessel has an exceptional maneuvering system with two independently controlled and operated hydro-dynamic Barke rudders. Independent proportional steering allows the rudders to be actuated either independently or synchronized.

“The key driver behind the Barke rudder is its innovative and sophisticated progressive high lift design, offering unsurpassed maneuvering and course keeping performance as well as smooth operational comfort,” says Van der Velden. “The progressively operating flap linkage system is contained in a fully enclosed, grease-lubricated Barke housing. This results in minimum wear on the linkage components and eliminates the problems caused by contact with floating objects.”

Van der Velden worked closely with the designer and shipyard to assure a smooth transition from initial design to final installation of the rudders.

“Van der Velden provided excellent technical support and on time delivery of design documents that helped us develop the engineering and design for the installation of their steering system,” said Guido Perla. “Their coordination with our staff was prompt and to the point. We appreciated their support.”

The tug, which is to be named M/V Sea Power, is scheduled for delivery later this summer.

Van der Velden says that a further set of Barke high-lift rudders is soon be installed on another ATB tug.