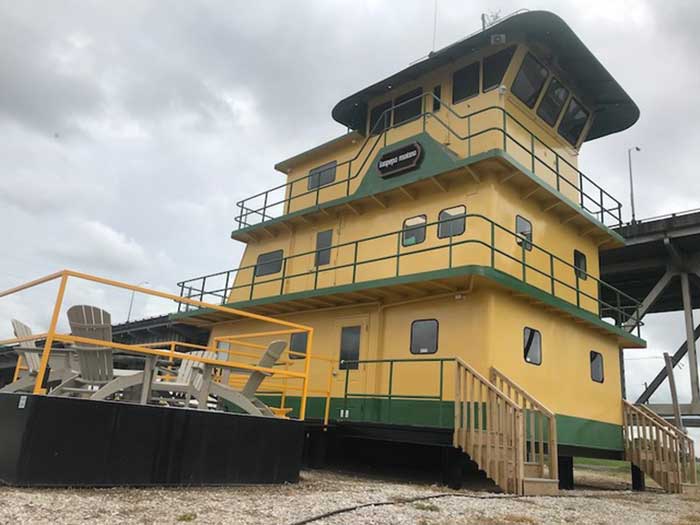 More than a year after first announcing plans for an office inspired by a towboat, Shamrock Marine has opened its new headquarters just upriver from the I-10 bridge on the Mississippi River at Baton Rouge, La. The building looks exactly like a wheelhouse because that’s what it started life as.

“The old rotting wheelhouse was in a field next to a shipyard we often visited to do repairs on our boats,” says Duncan Armentor Sr., co-owner and founder of Shamrock Marine. “I used to look at it from time to time and tell my port engineer that it would make a great office. A couple of calls later, I bought it and hired a crane to retrieve it.”

The old wheelhouse was entirely gutted, rebuilt and painted from its original state.

Shamrock Marine is a warehousing and vessel transport provider of goods and services to towboats and oceangoing vessels midstream. Armentor says the new office meets a variety of company needs.

Its main deck is a crew waiting lounge area, with a bathroom, snack and coffee station, and has a dispatch office. On the second deck, there’s a corporate office, additional bathroom and another coffee station. Up from there on the third floor, is a conference room. The former towboat’s pilothouse has been transformed into a meeting room and 4D theater, with three removable screens inserted in the vessel’s front windows and a projector that displays a tow. The theater has working radar and air throttles.

“We are planning on using this 4D theater to help spark interest in young children in the marine industry,” says Armentor.

In addition to its new office, Shamrock Marine has been busy building the first of many new state-of-the-art custom crew boat docks. Armentor says the docks will be half enclosed with dock cranes and a wet slip to allow for the easy loading and unloading of crew personnel and cargo in any weather condition, day or night.

The docks will have solar-powered lighting, and the roof will capture and store rain water for dock use. The docks are being built in Pittsburgh, and will be more than 400 feet long.