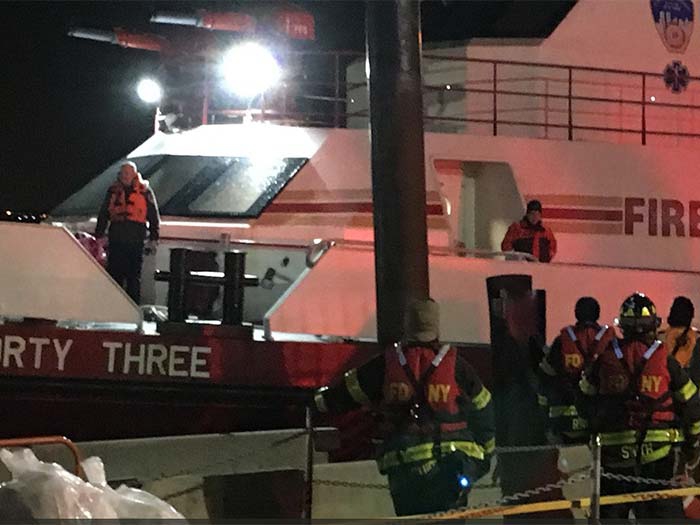 Rescued passengers were transferred to fireboat 343 in a shuttlle operation

DECEMBER 28, 2017 — Coast Guard and partner agency crews last night responded to a ferry aground with 27 people aboard near Rockaway Inlet, New York.

The Flyer, an 80-foot New York City Ferry became stuck on a sandbar at approximately 5:30 p.m after departing from the Rockaway terminal at 5:15 p.m., en route to Wall Street’s Pier 11.

Shallow water prevented Coast Guard crews from safely approaching the ferry, but the FDNY was able to evacuate 23 passengers and a crew member safely.

“Shortly before 6 p.m. the Department received a call for a ferry that was run aground in Jamaica Bay,” says FDNY Chief of Special Operations John Esposito. “We responded with land units and our fireboats, and determined that the boat was run aground in about 2′ of water. We devised a shuttle operation to remove 27 people from the ferry, onto a smaller fireboat, onto the medium-sized fireboat, and eventually onto our 140′ fireboat, the Fireboat 343.

“It was difficult because they had to climb down a 12′ straight ladder, down the back of the ferry, onto our boat, then transferred onto several different boats. It was a very slow, tedious, time-consuming operation, with safety in mind. In 20 degree weather, out in the water with the breeze blowing – it was definitely very cold for everybody involved. NYPD, FDNY, and the United States Coast Guard were out there dealing with the elements. The passengers are now out of the elements, we have no reported injuries.”

Coast Guard personnel remained on scene to monitor the removal of the ferry.

The Coast Guard is also investigating the cause of the grounding.