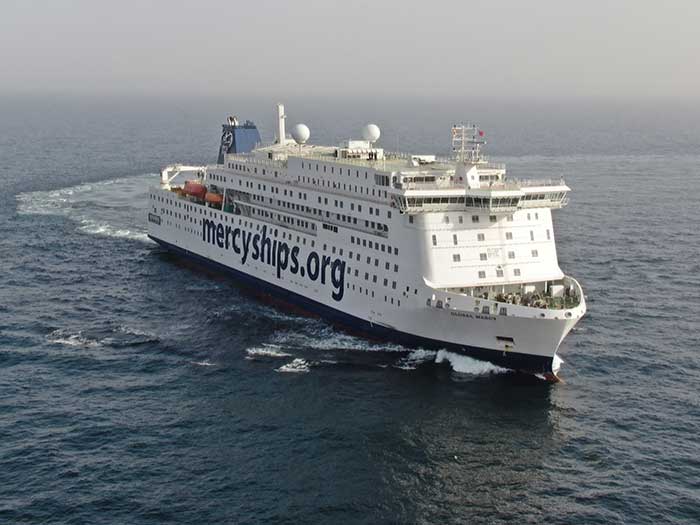 The world’s largest civilian hospital ship, Global Mercy, has completed sea trials. Gothenburg, Sweden-based Stena RoRo, which is managing construction of the ship on behalf of the international charity organization Mercy Ships, reports that the trials were completed with good results.

After several years of construction, the Tianjin Xingang shipyard in northern China will present the ship for delivery this summer and it will then sail to Antwerp in Belgium on its maiden voyage.

“These deep-water trials represent a critical checklist for our new purpose-built ship to become the platform for service it is designed to be,” said Jim Paterson, marine executive consultant for Mercy Ships. “The trials systematically test operational aspects by putting the vessel through paces for an extended period at sea. I am pleased to say that the Global Mercy successfully passed every test.”

“We are then left with some finishing touches in the interior, particularly the hospital area before we take delivery,” Paterson added.

According to Robert Corley, chief 0perations officer at Mercy Ships, while docked in Antwerp, the Global Mercy will complete several months of final outfitting and crewing. This includes installation of medical equipment and IT systems as well as stocking the vessel with supplies through the Mercy Ships European Distribution Center in the Netherlands.

The visit to Europe will culminate in a final send-off from Rotterdam for the ship’s first voyage to Africa. Mercy Ships also plans to hold an Africa commissioning event for the arrival of the Global Mercy in Dakar in early 2022, at the start of the ship’s first field service in Senegal.

The purpose-designed hospital decks are the unique heart of the ship, consisting of six operating theaters and hospital wards for 200 patients, laboratory, general outpatient, ophthalmology and dental clinics. The ship has space for up to 950 persons in port including 641 crew, comprised of volunteers from around the globe. The Global Mercy will be equipped with first-class training facilities to allow Mercy Ships to contribute to the sustainable support of essential surgical and related skills for local healthcare professionals when docked.

“The purpose of a sea trial is to ensure that the ship’s systems are working properly during operation and that the requirements of the specifications and applicable standards are met,” says Per Westling, CEO Stena RoRo. “The hospital services to be provided on the Global Mercy entail increased requirements for good ventilation and minimization of vibrations, for example. This was also checked and she was approved on all counts.”

The Global Mercy project began in 2013 with Stena RoRo taking responsibility for design, contracting and execution. The ship is the result of a global collaborative project with the participation of a number of subcontractors from around the world. Swedish Stena RoRo is leading the project and Finnish Deltamarin is conducting work with design. A French shipbroker, Barry Rogliano Salles, (BRS Group), assisted in preparing the contract and the ship is being built at the Tianjin Xingang shipyard in northern China. The vessel, which is classed with Lloyd’s Register in the U.K. will sail under the Maltese flag and operate along the coast of Africa.

Stena RoRo has based the project on a concept for passenger and cargo ships for international travel in the RoPax class. The concept has been modified to a purely passenger ship design with hospital functions.

With an overall length of 174 meters, a beam of 28.6 meters, and a gross tonnage of 37,000, the ship has a design draft of 6.15 meters and a service speed of 12 knots. The new vessel is the first ship built from design to implementation by Mercy Ships as all its previous ships were adapted from other purposes. The Global Mercy will join the current Mercy Ship, Africa Mercy in service to sub-Saharan and Central Africa.