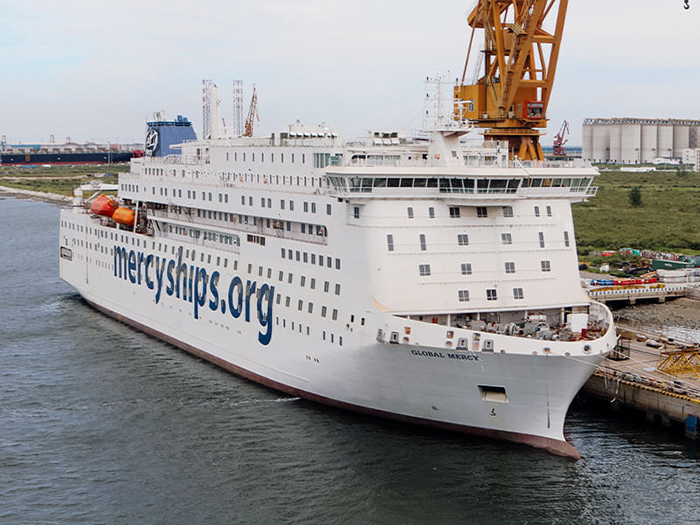 The Global Mercy – the world’s largest civilian hospital ship – will soon to be ready and leave the Tianjin Xingang shipyard in northern China.

“As COVID-19 threatens the stability of already fragile healthcare systems globally, the need to provide accessible, life-saving surgical care is greater than ever,” says Rosa Whitaker, President for Mercy Ships.”The Global Mercy represents a unique call to support the strengthening of healthcare systems in Africa on behalf of the most vulnerable.”

The Global Mercy – the world’s largest civilian hospital ship – will soon to be ready and leave the Tianjin Xingang shipyard in northern China.

Stena RoRo, which has been responsible for the design, contracting and construction oversight of the complex vessel, today released a time lapse video of the vessel under construction.

“We have applied one of our concepts on a ship from the RoPax-class, which are passenger and freight vessels for international voyages, and modified her into a pure passenger ship with hospital capabilities,” says Per Westling, CEO of Stena RoRo AB. “Instead of a car deck, we’ve built operating rooms and hospital wards. The ship will have space for about 950 persons with everything needed for both patients and those who work on board, including grade schools and nursery schools for the children of staff.”

Hospital operations require large spaces —the ship will have six operating rooms — and have specific requirements, which have affected both the hull design and the layout of the interior. The ventilation system has been specially adapted to hospital requirements and focus has been placed on minimizing vibration and noise.

The Global Mercy will be powered by four Wärtsilä 32 engines. These are double resilient mounted, and comply with the DNV VIBR vibration classification. This smooth running capability is of special importance for a hospital ship with onboard surgical operations taking place.

Mercy Ships is also contributing to the sustainable construction of the local infrastructure for medical care by training local health professionals. This is why the Global Mercy is equipped with first-class training facilities, including equipment for virtual reality training and other simulations of care and methods for use in environments with limited resources.

The ship is equipped with large cranes in order to be able to take on containers with provisions, vehicles and other equipment as the ship is to be used for long periods in port. Mercy Ships has been providing medical care on ships for more than 40 years. With cooperative agreements by the governments of the beneficiary countries, Mercy Ships hospital ships are in a port in each country for about ten months. The Africa Mercy, a converted train ferry, has been in service since 2007.

The 174 foot long Global Mercy is the organization’s first newly built hospital ship and will more than double the capacity of Mercy Ships to deliver aid.