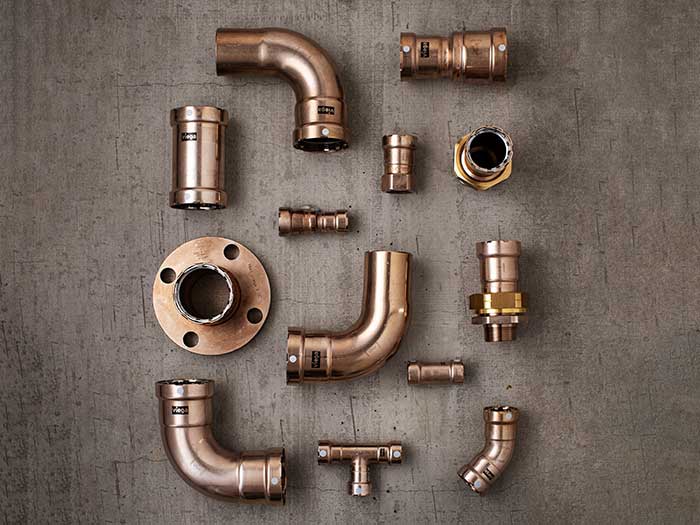 Naval Sea Systems Command (NAVSEA) has approved the use of Viega MegaPress CuNi mechanically attached fittings in sizes ½” to 2″ in surface combatants for a variety of systems, including chilled water, potable water, electronic freshwater cooling, seawater cooling, washdown countermeasures, drainage and others.

“NAVSEA is arguably the toughest standard in the world and earning that approval has been a longtime goal of Viega,” said Viega LLC’s Director of Marine T.J. Tracy. “It’s an affirmation of just how reliable and durable our fittings are in even the most demanding circumstances.”

The first is mitigation of fire. Fire is one of the greatest dangers in ship construction, repair and maintenance. There were more than 600 shipboard fires documented between 2017 and 2020. A recent analysis by the Society of Naval Architects and Marine Engineers found more than half of the fires were caused by hot work, such as welding and soldering.

In July 2020, welding sparks ignited small fires on Navy ships at two separate shipyards. Though they were quickly extinguished, the fires prompted work shutdowns while safety measures were reviewed. That same month, the amphibious assault ship Bonhomme Richard burned for four days while pierside in San Diego. Repairs were estimated to take six years and cost $3 billion so the Navy was forced to decommission the ship 18 years ahead of schedule.

Because pressing does not require heat, flame or an external power source, it eliminates the danger of fire when joining pipe. It also makes it unnecessary to post a fire watch or to prepare job site for hot work.

The second benefit is cost and labor savings. Pressing can reduce installation time by 70% over traditional methods of joining pipe. When coupled with savings when testing the systems, due to near zero leaks, the cost and schedule advantages easily outweigh the investment. Studies carried out by NASSCO show that testing pressed pipe fittings costs less due to fewer leaks, repairs and retesting.

“Viega has been helping commercial marine and other industries benefit from pressing for years and we’re excited to bring that technology to our defense partners,” said Tracy. “We’re proud and confident that our fittings will make pipe joining safer, faster and more efficient on Navy ships.”

The primary NAVSEA-approved fitting is MegaPress CuNi, a 90/10 copper nickel alloy specifically designed to withstand harsh marine environments. It can be used on Schedule 40 and Class 200 90/10 copper nickel pipe. The second is the ProPress copper fitting system, which offers more than 400 different configurations and three different sealing elements: EPDM, FKM and HNBR.

The Navy approval follows many other marine-related approvals for Viega products. The U.S. Coast Guard, American Bureau of Shipping, DNV, Lloyd’s Register, Bureau Veritas and RINA all have previously approved the use of Viega fittings in marine environments.