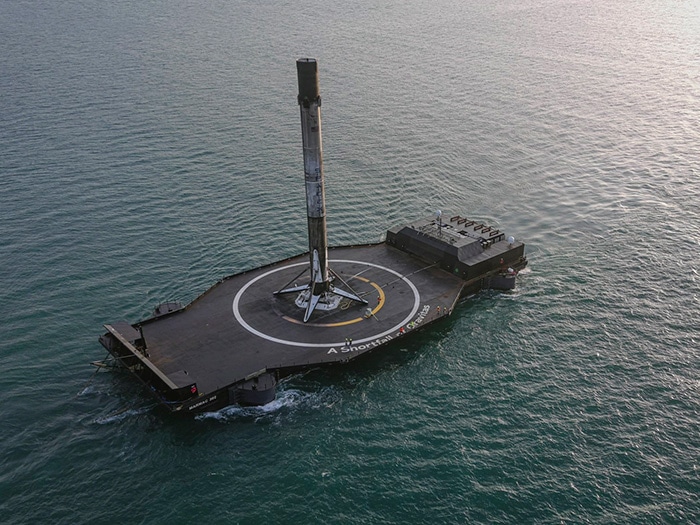 With names like Of Course I Still Love You and A Shortfall of Gravitas, SpaceX’s autonomous rocket recovery drone ships have quite a fan base of followers of their own. Now SpaceX has signed a joint development project (JDP) with ABS to review the remotely controlled functions of the vessels.

The rocket recovery drone ships are based on highly modified deck barges. A Shorfall of Gravitas, for instance, as we reported last year, was converted from a McDonough Marine Services deck barge, the MARMAC 302.

Modifications made to the original vessels to create the drone ships include an expanded deck to increase the size of the landing platform, four thruster engines for propulsion and to hold on station, and blast shielding to protect electrical and engine equipment on deck.

The drone ships are entirely unmanned during landings, with a robot deployed on board to secure the rocket booster to the vessel before it returns to port.

The JDP will review the design of one of SpaceX’s three rocket recovery drone ships for compliance with the ABS Guide for Autonomous and Remote-Control Functions. Due to the unique and challenging operating requirements, ABS will apply a risk-based approach to the evaluation of the autonomous functions.

“Through our work on autonomous and remote-control technologies in projects with leading partners all over the world, ABS has been leading the way in supporting its practical application at sea,” said Patrick Ryan, ABS Senior Vice President, Global Engineering and Technology. “This makes us ideally placed to work with SpaceX on its unique and exciting project. We are proud that our capabilities in this area have been recognized by a true pioneer such as SpaceX.”

ABS is a leader in supporting the development of autonomous and remote-control functions at sea. A remotely operated harbor tug developed by Keppel Offshore & Marine was the first in the world to receive the ABS REMOTE-CON Notation in October 2021.