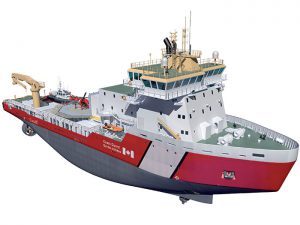 JULY 22, 2018 — On behalf of the Canadian Coast Guard, Public Services and Procurement Canada has issued an Advanced Contract Award Notice (ACAN) to shipbuilder Chantier Davie of Lévis, Quebec, for 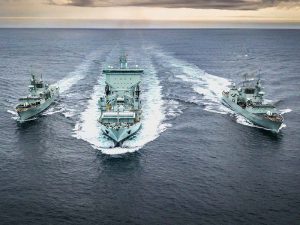 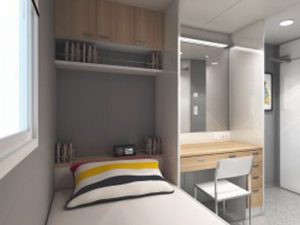 OCTOBER 19, 2915 — Canadian shipbuilder Chantier Davie Canada, Inc. says it has formalized a partnership with Turku, Finland, headquartered ALMACO Group, which is perhaps best known for its work on cruise 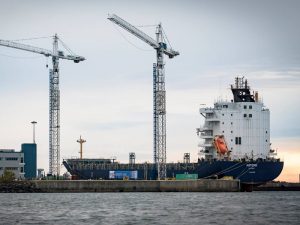 The project will see Davie convert MV Asterix, a 183 m containership acquired from Greece’s Capital Ship Management for a reported Canadian $20 million, into a stop gap fleet oiler for the Royal Canadian Navy. Some of the work will be done by the Aecon Group, whose Pictou, Nova Scotia, facility specializes in pipe fabrication. At one time it was thought that the Asterix would go first to Aecon’s Pictou shipyard, but its arrival at Davie indicates that Aecon will work on the ship there.

The interim fleet oiler is needed because of the earlier than anticipated retirement of Canada’s Protecteur-class ships.

In March last year, Davie and its partners, Aecon, naval architect firm NavTech and V.Ships, set out to find an interim solution that would provide a fast-track, affordable, compliant and fully managed service.

After over one year of design, engineering and planning, after a lengthy consultation with industry, an agreement was reached in August 2015 with the Government of Canada to provide at-sea support services to the Royal Canadian Navy.That agreement is a letter of intent that, according to the Government, provided the two companies “with the ability to start limited activities to advance the schedule. It will also provide some financial protection to the shipyard for these expenses, should a contract not be awarded. Any proposed costs would be pre-approved by the government, which will require Davie to provide a rationale in every instance.”

What the status of an actual contract is remains unclear. But the Asterix is already at the shipyard with Davie saying that the “acquisition from its former owners is now complete.”

The cost of the conversion has been reported as Canadian $250-300 million.

Once converted, the ship will be chartered to the Canadian Government by Project Resolve, Inc. which, like Davie, is a subsidiary of privately held, Monaco headquartered Inocea Group.

Reportedly, the Canadian Government will pay Canadian $75 million a year to charter the vessel. The ship will be crewed with Canadian merchant mariners.

Yesterday, the ship provided the back drop for the introduction of the CEO of Project Resolve Inc., Spencer Fraser, to the Lévis-Bellechasse candidates. He likely showed them some of the pictures you see here.