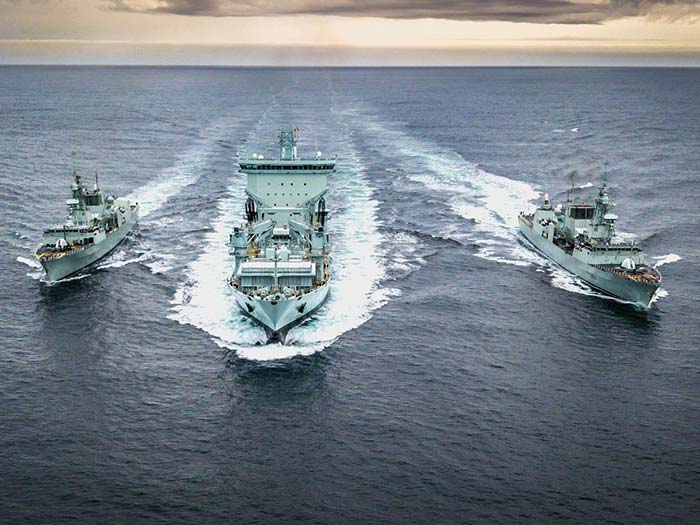 During the Royal Canadian Navy trials, as planned, Asterix performed daily replenishment-at-sea (RAS) exercises with the RCN and conducted extensive RCAF CH-148 Cyclone helicopter operations to prove and demonstrate its capabilities. The exercises have included everything from dual RAS operations to helicopter landing, take-off and vertical replenishment trials.

Spencer Fraser, CEO of Federal Fleet Services commented “To deliver the first Canadian naval ship in over twenty years, the first supply ship in almost 50 years, and to reach FOC [Full Operating Capability] so efficiently and in such a short period of time is a testament to the hard work, dedication and dynamism of the teams at Davie and FFS. We are all very proud of our achievement and appreciative of the professional support we have received from DND and PSPC.”

Fraser added, “We promised the government that we would fill a strategic gap in an expedited manner, that we would save the Canadian taxpayer money with our solution, and most importantly, that we would provide the men and women of the RCN and RCAF with a world-class capability they could be proud of. Today marks that achievement and we stand ready to assist the Government of Canada to do more.”

That more now looks set to be icebreakers. Davie and Federal Fleet Services have been pushing a proposal to provide the Canadian Government with icebreaking and services by converting available icebreaking offshore tonnage, such as Edison Chouest Offshore’s Aiviq, to meet Canada’s needs (see earlier story)

Canada published an RFI on November 17, 2017 seeking “information regarding the potential pricing and availability of interim measures to provide icebreaking and towing services.”

And on January 18, Prime Minister Prime Minister Justin Trudeau said, in a Radio-Canada interview, in French: “Tomorrow morning at nine, Davie and the coast guard will begin negotiations on the purchase of icebreakers,”

“Yes, it’s good news,” he added. “We’re heading into negotiations, but we believe we’ll be able to find a solution.”