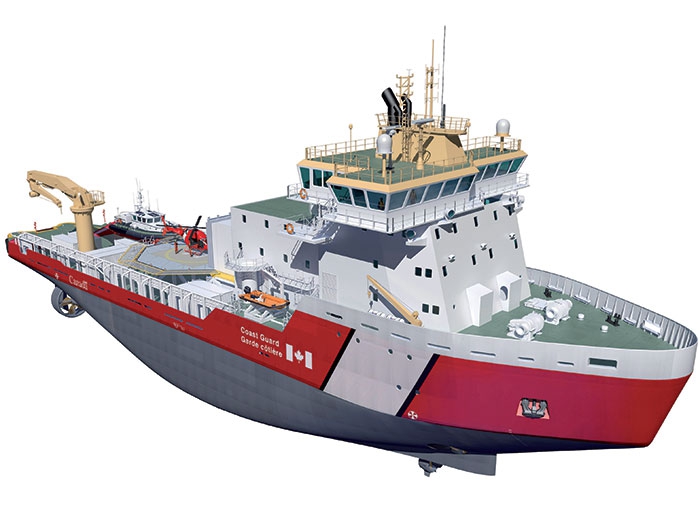 JULY 22, 2018 — On behalf of the Canadian Coast Guard, Public Services and Procurement Canada has issued an Advanced Contract Award Notice (ACAN) to shipbuilder Chantier Davie of Lévis, Quebec, for the acquisition and conversion of three medium commercial icebreakers. This ensures a fair, competitive process allowing any supplier with a comparable option to also submit a proposal before a contract is awarded.

The ACAN confirms Canada’s intention to enter into a contract with Chantier Davie. Other interested suppliers have 15 calendar days to signal their interest in bidding for this contract, by submitting a “statement of capabilities” that meets the requirements laid out in the ACAN.

These ships would provide interim capability for the Canadian Coast Guard, while replacement vessels are being built under the National Shipbuilding Strategy. Icebreakers are essential to ensuring that Canadian ports remain open during Canada’s ice seasons, ensuring goods such as fresh produce and fuel are delivered safely.

According to Public Services and Procurement Canada, the acquisition will consist of purchasing a class of three existing Anchor Handling Tug Supply icebreakers.

These ships will be used to backfill for Canadian Coast Guard vessels while they are undergoing maintenance, refit and vessel life extension.

These ships will conduct critical icebreaking duties for the Southern wintertime program and are to be deployed as needed in support of Arctic summertime programs.

The first ship will be put to immediate use for icebreaking during the upcoming 2018-2019 season.

Buoyed by the success of Project Resolve, under which it converted a containership into what is now the Naval Support Ship Asterix, Davie has been pushing the replacement icebreaker project under the name Project Resolute for some time.

Project Resolute proposed using the same leasing model for four icebreakers, including a polar icebreaker. The candidate ship for that conversion was Edison Chouest Offshore’s Aiviq.

Today’s Canadian Government announcement, however, makes no mention of Federal Fleet Services or leasing, and focuses only on the three medium icebreakers offered under Project Resolute. The three candidate ships proposed by Project Resolute for this role are the Viking Supply Ships AB vessels Tor Viking II, Balder Viking and Vidar Viking.