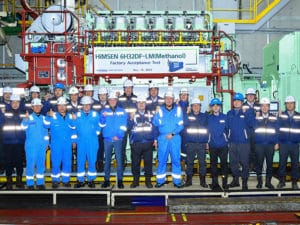 A methanol dual fuel genset engine for the world’s first methanol-fueled containership has completed its FAT(Factory Acceptance Test) for the shipowner, Maersk. The engine is a Hyundai Heavy Industries – Engine & 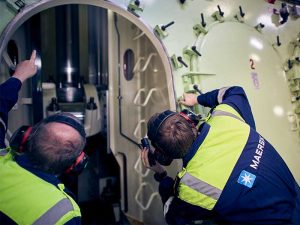 A.P. Moller – Maersk has agreed a contract that will see Hyundai Mipo Dockyards build a 172 meter feeder vessel with a dual-fuel engine technology that will enable it to sail on 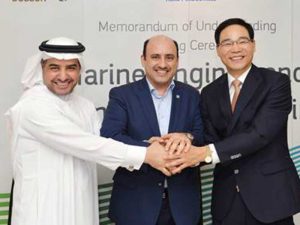 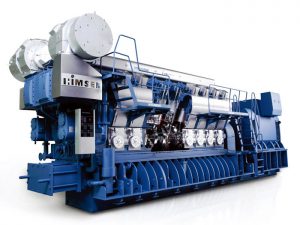 MARCH 3, 2016 — South Korea’s Hyundai Heavy Industries (HHI) is not only the world’s largest shipbuilder but also a leading marine engine manufacturer — and it has just produced its 10,000th 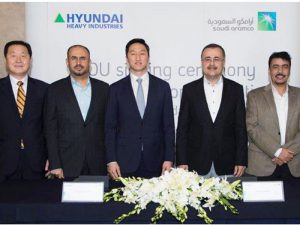 The MOU follows discussions on strategic collaboration that were initiated when Saudi Aramco’s Board of Directors visited HHI’s Ulsan, South Korea, complex in April 2015.

Mr. Chung, who represented HHI for all relations with Saudi Arabia and Saudi Aramco, led the efforts that culminated with a signing ceremony presided over by Saudi Aramco President and CEO Mr. Amin H. Nasser at Saudi Aramco’s Dhahran, Saudi Arabia, headquarters.

According to Mr. Chung, the partnership is “a great opportunity to enhance Korea’s shipbuilding and EPC businesses” and continues a contribution to the Kingdom by HHI that goes back to the 1970s when it was awarded a contract to undertake development of the Jubail port (King Fahd industrial port) project.

“This signing is significant as it provides the potential for the creation of another Jubail that creates tremendous growth opportunities for HHI,” said Mr. Chung.

Saudi Aramco has been looking to develop a yard at Ras Al-Khair, 60 km north of Jubail, in coordination with the National Shipping Company of Saudi Arabia (Bahri) and HHI as potential partners.

The yard would leverage the partners’ offshore business to accelerate localization efforts of Saudi Arabia’s young and promising maritime industry, and its associated supply chain. HHI’s role would include winning shipbuilding vessels while participating in construction and operation of the shipyard and gaining opportunities to provide various value added services.

The project would enable the partners to cater to growing Middle East vessel demand and to build vessel types that it is no longer profitable to build in Korean shipyards.

Also being eyed is a future engine building joint venture that would allow the HHI-developed HiMSEN engine to expand its share of both the marine and power plant sectors in the region.

Another strategic partnership under development relates to HHI’s Middle East EPC business, seen as the seed for a joint cooperation through which a regional EPC champion could be created. 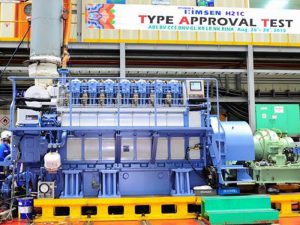 The four-stroke CLEAN HiMSEN engine (Model H21C) improves power output by 20 percent and fuel efficiency up to 2 percent compared to the existing same class four-stroke engines, H21/32, while physical size and weight are 10 percent lower, thanks to the utilization of high pressure combustion technology.

Mr. Youn Joong-geun, executive vice president of HHI’s Engine & Machinery Division said, “Our next-generation CLEAN HiMSEN engine is the culmination of our 40 years of technological know-hows and experiences. With the customer-oriented engineering, the high-output and high-efficiency engine will surely bring mutual benefits to HHI and its valued customers.”