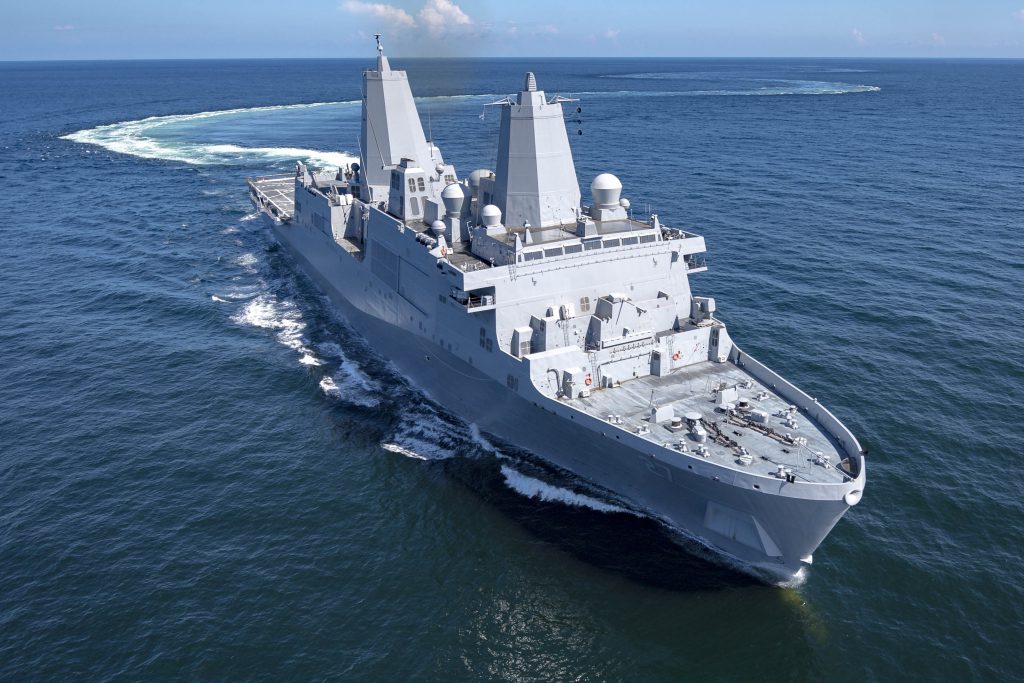 Portland (LPD 27), sails through the Gulf of Mexico during her acceptance sea trial

Portland is the eleventh San Antonio class Amphibious Transport Dock ship to be presented to the Navy’s Board of Inspection and Survey (INSURV) for acceptance. Acceptance Trials are conducted with INSURV and are intended to demonstrate a ship’s readiness for delivery through a series of dock-side and underway tests and evaluations.

“The USS Portland is a well-designed ship that is going to increase our Navy and Marine Corps warfighting capability for years to come,” said Vice Adm. Thomas Moore, Commander, Naval Sea Systems Command. “The material condition of the ship is fantastic, and the success she had during acceptance trials is a true testament to the men and women that built her.”

Vice Adm. Moore embarked on Portland for the first underway day of sea trials. He observed the anchoring and the detect-to-engage demonstrations, and visited with government and shipyard workers who achieved this milestone. He also addressed Portland’s crew who will take ownership of LPD 27 next month.

“The success of these trials reflects a continuing trend of delivering highly capable ships to the fleet,” said Capt. Brian Metcalf, LPD 17 class program manager for Program Executive Office, Ships. “Completing this milestone is another significant step in Portland’s progression toward joining her ten sister ships – LPDs that have conducted operational missions, air strikes, and humanitarian relief missions along with their Marine Corps partners for 20 deployments worldwide. “

“The Navy and shipbuilder worked diligently to complete Portland and to fully demonstrate her capabilities in over 200 events,” said Capt. Brian Lawrence, Supervisor of Shipbuilding, Gulf Coast. “Their collective, exceptional efforts over the past five days are a culmination of years in planning, production, quality assurance, and testing by every member of the government/industry team.”

“These sea trials provide an opportunity to showcase the ship’s tremendous capabilities and the build and test skills of our shipbuilders,” Ingalls Shipbuilding President Brian Cuccias said. “The success of these milestones is important as we continue to remain competitive and keep our supplier base and production lines active in the construction of these quality amphibious warships.”

“Our team puts in a lot of hard work and effort to make these sea trials successful,” said George Jones, Ingalls’ vice president of operations. “We get better with every LPD we build, and we look forward to delivering a very complex and capable ship to our sailors and Marines. As always, this success was a joint effort between our shipbuilders, test and trials team and our partners at Supervisor of Shipbuilding, Gulf Coast.”

Ingalls has delivered 11 San Antonio-class ships to the Navy, including John P. Murtha (LPD 26) in 2016. In June, Ingalls received an advance procurement contract from the U.S. Navy to provide long-lead-time material and advance construction activities for LPD 29, the 13th amphibious transport dock of the San Antonio class. Ingalls will lay the keel of the 12th San Antonio-class ship, Fort Lauderdale (LPD 28), this fall.

“Portland’s successful sea trial proves the dedication and quality of work our shipbuilders continue to provide to the LPD program,” said Steve Sloan, Ingalls’ LPD program manager. “I’m proud of the performance of the shipbuilders and the ship during acceptance trials, and now we will continue to work the final fit-and-finish touches before LPD 27’s delivery this fall.”