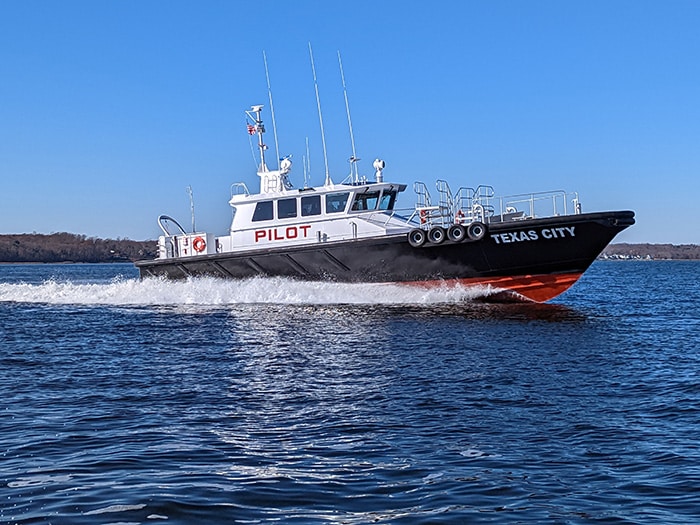 Texas City is the first pilot boat in the U.S. to feature the Seakeeper gyro stabilization system

With a length overall of 73.2 feet, beam of 23.3 feet and draft of 5.9 foot, the all-aluminum, high-speed pilot boat features the Ray Hunt Design deep-V hull.

Humphree interceptors, with active ride control and coordinated turn and automatic trim optimization, are installed at the transom to automatically optimize the vessels running trim, and actively reduce pitch and roll at speed above 15 knots.

“The additional Seakeeper stabilizing gyro reduces roll at all speeds and will improve safety and reduce fatigue, especially while standing by for ships offshore and boarding pilots in a sloppy anchorage,” says Duclos.

The wheelhouse, mounted to the flush deck aft of amidships of the launch, features a center-line helm station, with a twin-lever control head and a 3-axis maneuvering joy stick.

The wheelhouse has heated forward and side windows, six Norsap 1500 shock-mitigating seats and a settee with table. Two Phasor 21 kW generators produce electricity.

The forecastle includes a stateroom with two berths, head, hanging locker, small galley and dinette. HVAC in the wheelhouse and forecastle is supplied by six self-contained, reverse-cycle air-conditioning units, totaling 80,000 Btu. Interior sound levels at full power are under 75 dBA. Outside the wheelhouse are wide side-decks and a flush main deck.

On the foredeck, aft of the wave break, are port and starboard boarding platforms. A Carlisle & Finch search light, with integrated NightFinder thermal camera, is located at the forward end of the wheelhouse roof.

A Harken TR-31 safety rail system has been installed on the wheelhouse handrails.

A control station, with a 3-axis maneuvering joy stick, is at the transom of the pilot boat, along with a winch-operated J-Basket rescue system and recessed stairs and platform for pilot rescue operations.