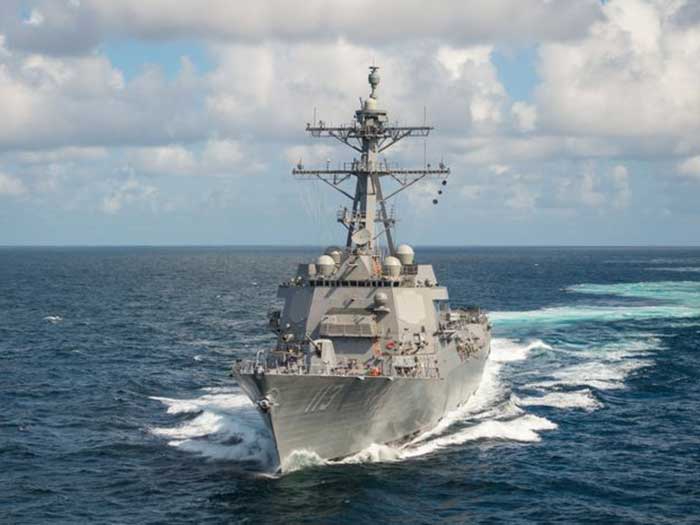 During this underway period, many of the ship’s systems were tested to demonstrate that they are installed properly and are operational. John Finn successfully conducted a full power run and demonstrated key communication, damage control and navigation systems as well as various hull, mechanical and electrical, and propulsion applications.

“The DDG 51 program has been the backbone of our shipyard for nearly three decades,” said Ingalls Shipbuilding President Brian Cuccias. “Getting DDG 113 underway is a significant milestone in this program, and we are looking forward to continuing our legacy of building these quality, complex ships for our U.S. Navy customer.

“The outstanding performance of DDG 113 during its initial sea trials—the first Arleigh Burke-class sea trials in nearly six years—is a testament to the outstanding workmanship of our Ingalls shipbuilders in building the ship to the highest quality standards for our sailors and for our nation,” Cuccias added.

The alpha trial was the first of three builder’s trials planned for John Finn, Ingalls’ 29th Arleigh Burke-class destroyer. The Navy is requiring three sea trials as part of the restart effort on the DDG 51 program.

John Finn is the first destroyer built by Ingalls since the company delivered USS William P. Lawrence (DDG 110) in 2011.

“There’s nothing like taking an Aegis destroyer to sea, and our test and trials, craftsmen and Supervisor of Shipbuilding team really managed this alpha trial well,” said George S. Jones, Ingalls’ vice president of operations. “We could really feel the quality of this ship while sailing through the Gulf. These ships are warfighters, and this extra set of trials will ensure the ship will get a lot of at-sea time in preparation for her delivery later this year.”

“We will immediately get back to work on DDG 113 and get her ready for bravo trials later this year,” said George Nungesser, Ingalls’ DDG program manager. “Our shipbuilders know and understand how important these ships are to our country’s defense, and it is something we take seriously. Our sailors deserve that focus.”

DDG 113 is named in honor of the Navy’s first Medal of Honor recipient of World War II. Finn received the honor for machine-gunning Japanese warplanes for over two hours during the December 1941 attack on Pearl Harbor, despite being shot in the foot and shoulder and suffering numerous shrapnel wounds. He retired as a lieutenant after 30 years of service and died at age 100 in 2010.

Arleigh Burke-class destroyers are capable, multi-mission ships and can conduct a variety of operations, from peacetime presence and crisis management to sea control and power projection, all in support of the United States’ military strategy. The guided missile destroyers are capable of simultaneously fighting air, surface and subsurface battles. The ship contains myriad offensive and defensive weapons designed to support maritime defense needs well into the 21st century.

The ship is 509 feet in length, has a waterline beam of 59 feet and a navigational draft of 31 feet. Four gas turbine engines will power the ship to speeds in excess of 30 knots. DDG 113 is planned to return to sea later next month for a second round of sea trials prior to a third underway period with members of the U.S. Navy’s Board of Inspection and Survey.