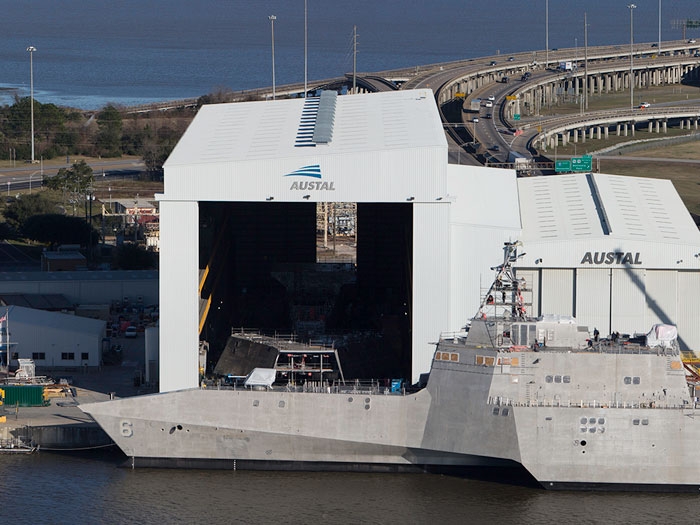 JANUARY 2, 2014 — Last month, Austal USA successfully completed the launch of the future USS Jackson (LCS 6). Though LCS 6 is the third Independence variant Littoral Combat Ship to be launched at the Mobile, AL, shipyard it is the first that Austal has been contracted to build for the U.S. Navy as prime contractor subsequent to a $3.5 billion block buy in 2010. It is also the first ship to be built in Austal’s new 59,000-square-foot state-of-the art assembly hall, Bay 5.

Craig Perciavalle, Austal USA President, commented, “The successful completion of this important milestone for the LCS program is directly attributed to the hard work and dedication of Austal’s incredible team of shipbuilding professionals. I’m so proud of our team, especially when you consider how fast we’ve grown over the past few years while still being able to successfully support this very important program with these cutting edge, high quality, highly capable yet cost-effective warships.”

The launch of Jackson was conducted in a multi-step process involving Berard Transportation’s self-propelled modular transporters (SPMTs) to lift the entire 1,600-metric-ton ship almost three feet in the air and moving the LCS approximately 400 feet onto a moored deck barge adjacent to the assembly bay. The deck barge with Jackson onboard was then towed a half mile down river to BAE Systems’ Southeast Shipyard where it was transferred to BAE’s floating dry dock, the Drydock Alabama. The floating dry dock was submerged with Jackson entering the water for the first time. Jackson was then towed back to Austal USA’s facility, where it will undergo final outfitting and activation before sea trials and delivery to the Navy.

“The launch of the third Independence-variant Littoral Combat Ship marks a significant milestone in this program,” said Mike Tweed-Kent, vice president and general manager of the Mission Integration Systems division at General Dynamics Advanced Information Systems. “Continuing to apply the lessons learned from LCS 2 and 4 to help the Navy strengthen its mission-critical capabilities, our OPEN CI will allow these ships to remain operationally relevant.”

The LCS program is in full swing at Austal USA with four ships currently under construction. Coronado (LCS 4), delivered to the Navy in September, will sail away soon with a commissioning ceremony in Coronado, Cal. in April. Montgomery (LCS 8) is being assembled in Bay 4 in preparation for launch in the spring. Construction is well underway in Austal’s Module Manufacturing Facility (MMF) on Gabrielle Giffords (LCS 10) and Omaha (LCS 12). Fabrication on Manchester (LCS 14) is scheduled to begin in early 2014.