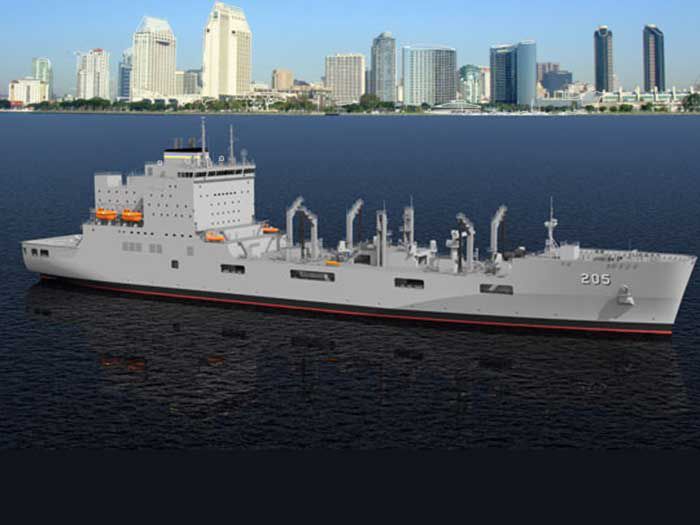 The John Lewis-class ships are based on commercial design standards and will recapitalize the current T-AO 187 Class Fleet Replenishment Oilers to provide underway replenishment of fuel to U.S. Navy ships at sea

Representatives from NASSCO and the U.S. Navy gathered at NASSCO’s San Diego shipyard for a ceremony to cut the first piece of steel, signifying the start of construction for the first of six vessels for the U.S. Navy. Construction of the first ship is scheduled to be complete in November 2020.

Designed to transfer fuel to U.S. Navy carrier strike group ships operating at sea, the oilers will have the capacity to carry 157,000 barrels of oil, a significant dry cargo capacity, aviation capability and a speed of 20 knots.

“These oilers are critical to the Navy’s ability to operate around the world,” said Kevin Graney, President of General Dynamics NASSCO. “We are honored to build the lead ship of this class and have worked with our Navy and industry partners to ensure the design, planning, material and facility are ready to begin construction. “

Before proceeding with the start of construction, the Navy conducted a Production Readiness Review (PRR) in order to verify the effectiveness and efficiency of the design and production planning within the program.

Among other indicators, the program reported detail design and 3D modeling of
the entire ships to be 95 percent complete. The results of the PRR were certified by the Secretary of the Navy and submitted to Congress on Sept. 6, 2018.

“Today marks a great accomplishment by the Navy and NASSCO team on this important program,” said James F. Geurts, Assistant Secretary of the Navy for Research, Development and Acquisition. “Their tremendous collaboration on this new double-hulled design is a great example setting a positive trajectory leading into production.”

In developing the T-AO 205 design, the Navy worked closely with industry partners to conduct trade off studies that matured the government-developed ship specifications. The results of the trade-off studies were then combined into integrated ship designs. GD-NASSCO was later competitively awarded a Fixed Price Incentive block buy contract for the detail design and construction of six T-AO 205 Class Fleet Replenishment Oilers.

The John Lewis-class ships are based on commercial design standards and will recapitalize the current T-AO 187 Class Fleet Replenishment Oilers to provide underway replenishment of fuel to U.S. Navy ships at sea. These ships are part of the Navy’s Combat Logistics Force and will become the backbone of the fuel delivery system. John Lewis will be operated by the Navy’s Military Sealift Command and is the first ship named after the civil rights leader and Presidential Medal of Freedom recipient.

“As the first ship of its class, the future USNS John Lewis will play amvital role in the mission of the Navy and Marine Corps, just like its namesake John Lewis’ vital role as a national leader in the movement for civil rights and human dignity,” said Mike Kosar, Support Ships, Boats and Craft program manager, Program Executive Office Ships (PEO Ships).