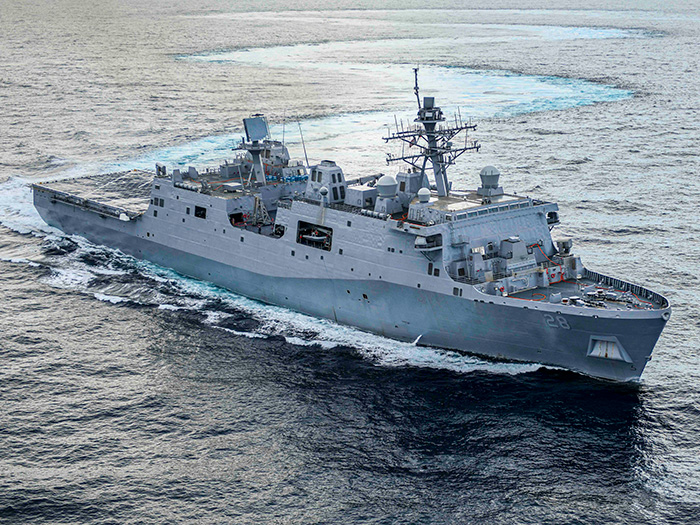 The ship, built at HII’s Ingalls Shipbuilding division, spent several days with the U.S. Navy’s Board of Inspection and Survey. Ingalls’ shipbuilders will now complete final finish work on the ship in preparation for delivery this quarter.

Acceptance trials consist of integrated testing to demonstrate the capability of the platform and installed systems across all mission areas to effectively meet its requirements. These demonstrations are used to validate the quality of construction and compliance with Navy specifications and requirements prior to delivering the craft to the Navy. LPD 28 will now prepare for delivery in a few weeks.

Key demonstrations by the Ingalls’ test and trials team included: anchor handling, ballast/de-ballast, detect-to-engage, and running the ship at full power and steering.

“It takes a lot of hard work from the entire shipbuilding team to make these sea trials successful,” said Mike Pruitt, LPD ship program manager at Ingalls Shipbuilding. “Fort Lauderdale is exhibit A of HII’s commitment to quality and meets our high standard for every ship that we build.”

“With the completion of both builder’s and acceptance trials, we are confident that LPD 28 has proven the operational readiness of the vessel and the capabilities it will soon bring to the fleet,” said Capt. Cedric McNeal, program manager, Amphibious Warfare Program Office, at the Navy’s Program Executive Office (PEO) Ships, “The collaboration between the Navy and our industry partners ensures that we’ll have a capable and ready ship for our sailors.”

The 684-foot-long, 105-foot-wide San Antonio-class ships are designed to support embarking, transporting, and landing Marines and their equipment by conventional or air-cushioned landing craft. The ship’s flight deck and hangar enable the operation of a variety of Marine Corps helicopters and the Osprey tilt-rotor aircraft (MV-22). The ships are able to support a variety of amphibious assault, special operations, expeditionary warfare, or disaster relief missions, operating independently or as part of Amphibious Readiness Groups, Expeditionary Strike Groups, or Joint Task Forces.

In addition to LPD 28, Huntington Ingalls Industries’ Ingalls Shipbuilding Division is currently in production of the future USS Richard S. McCool (LPD 29) and the future USS Harrisburg (LPD 30), with LPD 31 planned for start of fabrication later this spring. LPD 28 and 29 will serve as transition ships to LPD 30 – the first LPD 17 Flight II ship.

LPD 28 and LPD 29 will incorporate design innovations and cost-reduction strategies based upon lessons learned and improved technologies.

“Fort Lauderdale is a terrific example of what our collective team is accomplishing together,” said Kari Wilkinson, president of Ingalls Shipbuilding. “LPD 28 demonstrates what Navy-industry collaboration can do to evolve a ship design to new requirements while maintaining the talented team that is demonstrating such efficiency and predictability in delivering on commitments. I couldn’t be more proud of their success.”