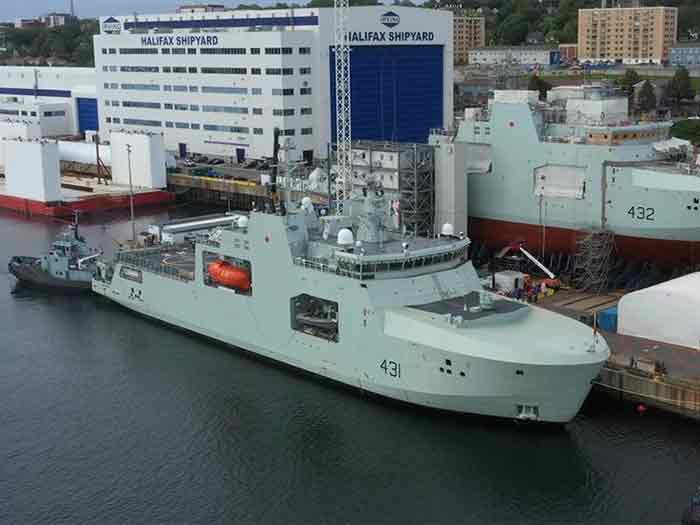 HMCS Margaret Brooke (foreground) departing the Halifax Shipyard for delivery to the Royal Canadian Navy Dockyard. The future HMCS Max Bernays (ship 432) is in the background and will be launched this fall.

The 6,615 tonne Arctic Offshore and Patrol ship (AOPS) is the first combat ship in the Royal Canadian Navy’s history to be named after a woman.

Lieutenant Commander Margaret Brooke, MBE, was a Royal Canadian Navy Nursing Sister decorated for gallantry during the Second World War. On her 100th birthday, Margaret Brooke received a phone call to inform her that Canada’s second AOPS would be named in her honor, making her the first living person in Canadian history to have that honour bestowed upon them. Margaret Brooke passed away in Victoria, B.C., on January 9, 2016.

The 103.6 meter vessel is the second ship to be delivered by Irving Shipbuilding under Canada’s National Shipbuilding Strategy. It is part of the DeWolf Class, the largest Navy vessels to be built in Canada in more than 50 years.