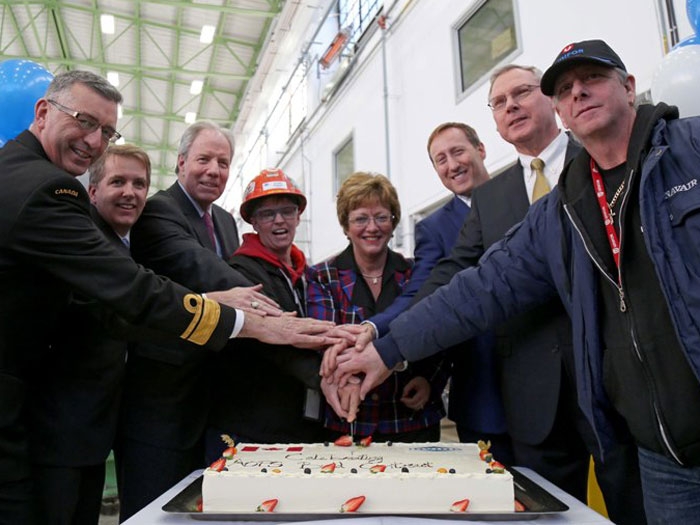 JANUARY 26, 2015 — As expected, Diane Finley, Canada’s Minister of Public Works and Government Services, along with Peter MacKay, Regional Minister for Nova Scotia, on Friday visited Halifax Shipyards to officially announce the awarding of the build contract with Irving Shipbuilding Inc. for the construction of six Arctic Offshore Patrol Ships (AOPS) as part of the National Shipbuilding Procurement Strategy (NSPS).

This contract, valued at $2.3 billion, marks the start of the construction phase under the NSPS.

She also confirmed that Irving Shipbuilding will be the Prime Contractor for the Canadian Surface Combatant project.

As we reported Friday, much of what she disclosed (and perhaps more) had already emerged in industry briefings and reported in the Canadian media.

Here, in part, is what the official Government of Canada press release said:

The contract has been designed to ensure best value for taxpayers and sets out the plan for the delivery of six ships within a ceiling price.

The AOPS build contract will sustain approximately 1,000 jobs at Irving Shipbuilding as well as many jobs at suppliers across Canada. For example, today, Member of Parliament, Bryan Hayes, highlighted that the majority (60 percent) of steel plate for the first Arctic Offshore Patrol Ship will be produced at the Essar Steel Algoma rolling mill in his riding of Sault Saint Marie in Ontario. To date, 197 companies in Canada have already benefited from NSPS work.

Construction of an initial block for the first AOPS is scheduled for the summer, while full production will commence in September 2015.

Delivery of the first HMCS Harry DeWolf class ship is expected in 2018.

It was also confirmed that Irving Shipbuilding will be the Prime Contractor for the Canadian Surface Combatant project. As outlined in the NSPS RFP and the resulting umbrella agreement with the selected shipyards, Canada retains the right to determine if the shipyard will be designated as the Prime Contractor. After discussions with industry and review by an independent third party, it was determined that Irving is best positioned to manage the contracts associated with the three decades of work to design and build these ships.

Today the Government of Canada joined Irving Shipbuilding and its employees to celebrate the signing of the $2.3B Arctic Offshore Patrol Ships (AOPS) Build Contract at Halifax Shipyard. The Honorable Diane Finley, Minister of Public Works and Government Services Canada and the Honourable Peter MacKay, Attorney General and Minister of Justice of Canada and Minister Responsible for Nova Scotia participated with Irving Shipbuilding as well as provincial, municipal and community leaders in an event to celebrate the official start of the construction phase for the first set of new navy combat ships to be built right here in Nova Scotia.

“On behalf of the men and women of Irving Shipbuilding, we are pleased to have been chosen to build these ships and are very excited to now start construction,” said Jim Irving, CEO of Irving Shipbuilding. “Working with the federal government, we’re focused on Canada’s strategic objectives to maximize opportunities for Canadians, strengthen the industry, and build world class ships for our country’s Navy.

It is estimated that more than 1,000 AOPS program jobs will be sustained at the yard at the peak of production, bringing total employment at Irving Shipbuilding to approximately 1,600 at this phase of the program. The company will begin recalling employees from its seniority lists later this year as AOPS construction progresses. It is expected that the largest trade requirements will be in the welding and metal fabrication/ironwork areas, with electrical and pipefitting needs increasing as the first ship reaches the latter stages of production. The largest future requirements for AOPS staff positions will be in planning and production management and supervision areas.

“We are already in advanced discussions with several Canadian companies regarding the design and manufacture of equipment and parts,” said Kevin McCoy, President of Irving Shipbuilding. “We just recently finalized a contract with Russel Metals for 1,500 tonnes of steel plate, to be used in the construction of the first ship. That steel plate will be produced at the Essar Steel Algoma rolling mill in Sault Ste. Marie, Ontario.”

Our Supply Chain team has increased to manage engagement with industry and harness the capability of Canadian companies. All Canadian companies with a capability to supply naval equipment are encouraged to register with the Irving Shipbuilding on-line database ( http://www.irvingshipbuilding.com/supplier-registry.aspx) and with Irving’s major AOPS subcontractors. Our database already has more than 1,700 Canadian companies registered, each of whom is able to receive news of the program and access to opportunities to participate in ship production.

At an industry engagement session held this week in Ottawa, the federal government selected Irving Shipbuilding as the Prime Contractor for the second set of NSPS combat ships, the Canadian Surface Combatant program. “

Thirty years ago we were pleased to serve as Prime Contractor for the successful completion of the Canadian Patrol Frigates. We value the partnership with Canada and are pleased to see it strengthened with this historic opportunity to design and build the next generation of combatant ships for those who serve. It’s an important step in the government’s efforts to end the boom and bust cycle in the shipbuilding industry. Canadians can count on the passion and skill of our team to deliver the best quality and value to those who serve,” said Jim Irving.‎

Irving Shipbuilding has committed more than $370M in Canada to date in contracts, procurement, goods and services related to the National Shipbuilding Procurement Strategy (NSPS), including both the Halifax Shipyard Modernization program and the work on the AOPS Definition Contract. A full 47%, or $174M, of that commitment has been made in Nova Scotia, engaging companies owned or operating in the province. This commitment has created more than 1,850 full time equivalent (FTE) positions in Nova Scotia with our company, with our suppliers and with their direct suppliers and $93M in employment income. In addition, it has generated $27M in local, provincial and federal taxes paid, as well as $70M in consumer spending over a two-year period (see Note).Across Canada, the NSPS commitment to date has boosted Canadian gross domestic product (GDP) by $308M, created more than 3,600 full time equivalent (FTE) positions across Canada (direct and indirect) and generated $226M worth of employment income in the country over a two-year period. It has also generated more than $169M worth of consumer spending and approximately $76M worth of taxes for federal, provincial and local governments.

“The count-down is on for steel cutting on September 1st,” said Jim Irving.