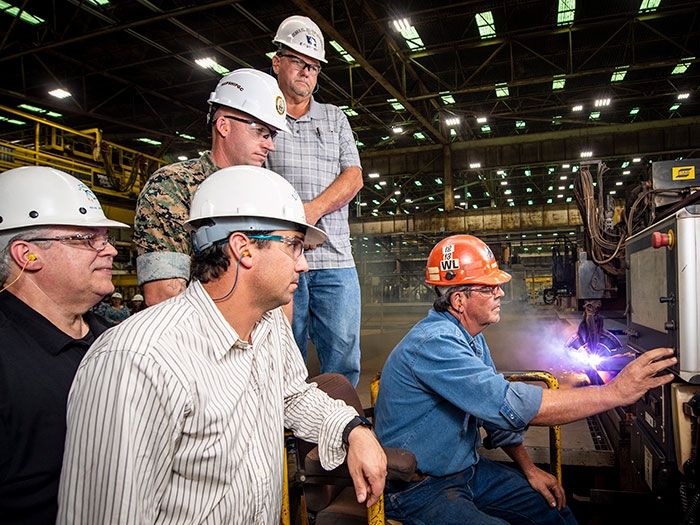 OCTOBER 17, 2018 — Huntington Ingalls Industries’ (NYSE:HII) Ingalls Shipbuilding division officially started fabrication of the America-class amphibious assault ship Bougainville (LHA 8) on October 15. The start of fabrication signifies that the shipyard is ready for sustained production and ready to move forward with the construction of the ship.

LHA 8 will be the first Flight I ship in the America-class and will retain the aviation capability of the design while adding the surface assault capability of a well deck. The well deck will give the U.S. Marine Corps the ability to house and launch two landing craft air cushion (LCAC) hovercraft or one landing craft utility (LCU) as needed during  maritime missions. Other additions to Bougainville include a larger flight deck configured for Joint Strike Fighter and Osprey V-22 aircraft, which can be used for surface and aviation assaults. The additional area on the flight deck comes in part from a smaller deck house and an additional sponson.

“We are excited to commence fabrication on the third ship of the America class,” said Tom Rivers, Amphibious Warfare program manager for the Navy’s Program Executive Office Ships. “We look forward to achieving future production milestones as we work to deliver this versatile and capable warship to the Fleet.”

“Our shipbuilders are proud to continue Ingalls’ legacy in amphibious shipbuilding,” said Ingalls Shipbuilding President Brian Cuccias. “The start of Bougainville, our 16th large-deck amphib, allows us to continue the serial production of these great ships. Working with the Navy and Marine Corps, we will take advantage of our hot production line and a healthy nationwide supplier base to continue providing these much-needed ships for the defense of our nation and the world’s sea lanes.”.