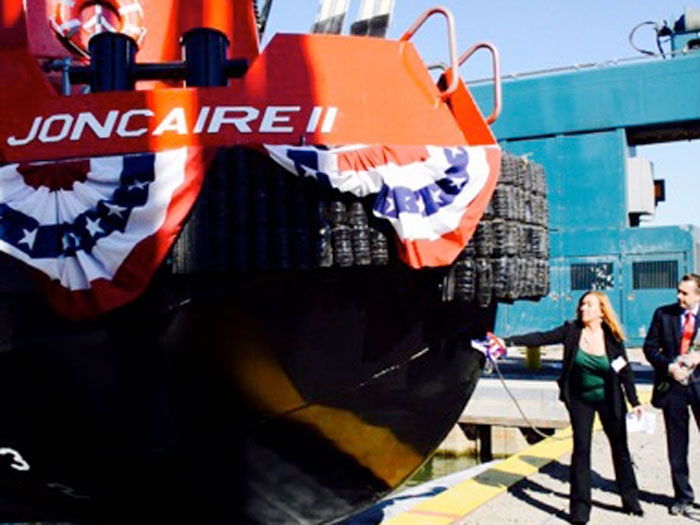 The sponsor of the Commissioning Ceremony was Karen W. Penale, Real Estate Administrator – Western Region, New York Power Authority – Niagara Project.
Breaking the traditional bottle of champagne, she declared "I name this tugboat Joncaire II. May God bless here and all who will sail on her."

Congresswoman Marcy C. Kaptur, U.S. Representative of the 9th District of Ohio, the principal speaker, commended the Company indicating that "We are fortunate to have a company like Great Lakes – their industry is the gift that keeps on giving. They are [through their education programs] passing on skills to the next generation, who will keep this country great."

She highlighted the significance of the achievement, "To create here, in the heart of America, a shipyard; a place that faces global competition every day, is no small achievement. It is extraordinary. Look at all of the suppliers that benefit from your efforts."

The tugboat is being built under a contract awarded this August. It will be another of the company's HandySize Class 3,400 HP twin-screw tugboats and will be used for harbor towing operations in Puerto Quetzal; a growing commercial cargo, container, and cruise port on the Pacific coast of Guatemala.

Representing the Regimen at the ceremony was Eduardo De Jesus Paiz Lemus, Presidente Junta Administrador, who inscribed his signature on the keel plate declaring that "The keel has been truly and fairly laid."

In recognition of the significant achievement for a U.S. domestic shipyard in competitively concluding a foreign sale, the U.S. Department of Commerce's International Trade Administration and the U.S. Embassy, Guatemala City, was represented at the ceremony by Antonio Prieto, Sr. Trade Specialist, who was credited by the company with facilitating the transparent negotiations and sale.

OCTOBER 27, 2015 — Great Lakes Shipyard, Cleveland, OH, hosted a double celebration last week: a commissioning ceremony for the first of two tugs under construction for the New York Power Authority and the laying of the keel of a tug for a Guatemala, Central America, export customer.