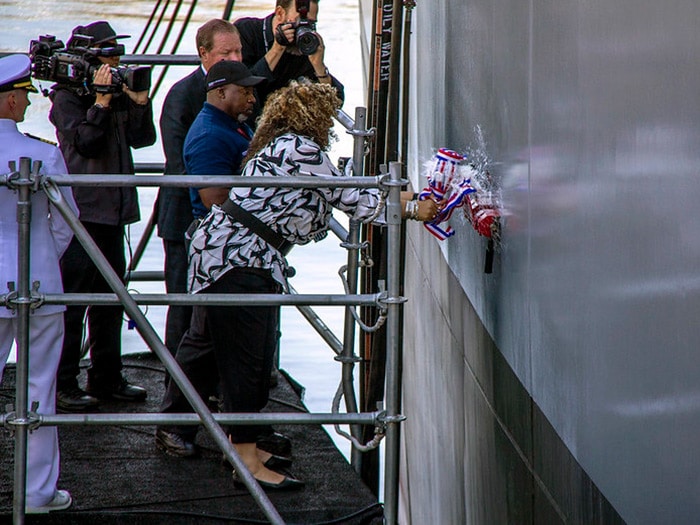 The 784-foot ship honors Gunnery Sgt. John L. Canley, a United States Marine who distinguished himself in battle during the Viet Nam war, in January/February 1968, during the Battle of Huế, with Company A, 1st Battalion, 1st Marines. Canley was originally awarded the Navy Cross but this was upgraded to the Medal of Honor, fifty years after the battle, making him the first living Black Marine to receive the nation’s highest military decoration for valor. The only previous black recipients in the Marine Corps who received the medal did so posthumously.

Canley is the sixth ship in the expeditionary sea base platform build for MSC, and the third expeditionary staging base model. When activated, Canley will primarily support aviation mine countermeasure and special operations force missions.

The official christening moment happened when the ship’s sponsor, Canley’s daughter, Patricia Sargent, broke a bottle of champagne over the ship’s bow with the words, “For the United States of America, I christen you the USNS John L. Canley. May God bless this ship and all who sail on her.”

“What we christen today is not just a ship,” said Dave Carver, president of General Dynamics NASSCO. “It is the embodiment of American unity and purpose; a beacon of freedom that will carry John Canley’s legacy and the legacy of America to people all over the world.”