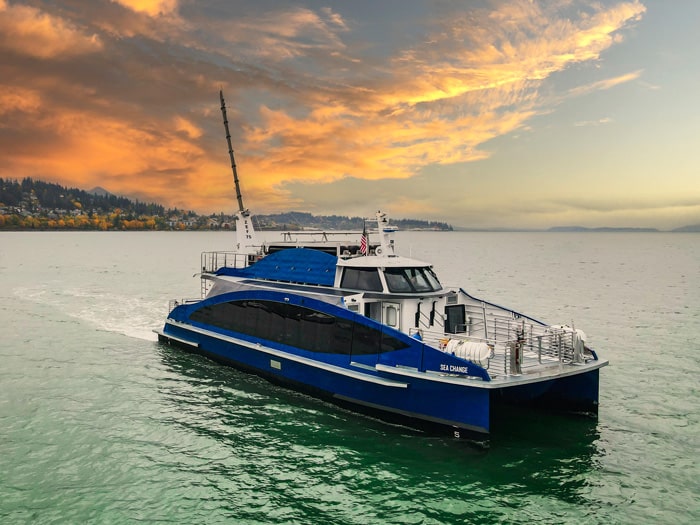 SWITCH Maritime’s landmark Sea Change hydrogen-powered ferry project got a lot of attention at Marine Log’s FERRIES 2021 held last November along the New York Harbor. This year, the conference heads to the West Coast on November 1-2, where the ferry is on the water in the San Francisco Bay.

Up to 75 attendees will get the chance to tour and ride the innovative new ferry. Guests are encouraged to register soon, as the tour will be on a first-come-first-serve basis. The conference agenda and registration info can be found here.

The 75-passenger ferry received gaseous hydrogen into its 242 kg tanks on the upper deck. It uses that hydrogen in fuel cells producing electricity to power electric motors for distances up to 300 nautical miles, and speeds up to 20 knots—similar capabilities to diesel-powered vessels—with the added benefits of zero exhaust smoke or other emissions and very little vibration and noise.

Though Sea Change is not the world’s first hydrogen-fueled ferry, it is the first to use gaseous hydrogen in a fuel cell, rather than burning liquid hydrogen in an internal combustion engine. Among the advantages of using gaseous hydrogen is its availability. This is underscored by the fact that the fuel loaded in the Sea Change’s tanks includes green hydrogen, produced in California by an electrolyzer powered with renewable solar power, so that zero carbon emissions result from the production of the fuel.

ZEI, formerly Golden Gate Zero Emission Marine, is responsible for the design and development of the Sea Change’s first-of-its-kind maritime hydrogen and fuel cell system as well as the vessel’s unique fueling system that allows it to be fueled directly from a hydrogen truck, and was responsible for the successful regulatory approvals of all hydrogen-related aspects onboard. ZEI is a hydrogen technology company that develops and sells turnkey hydrogen power systems, advanced fuel cell balance of plant sub-systems, fueling systems, and proprietary safety systems for a range of applications.

While it is expected that many more will sign on, FERRIES 2022 already has nearly 30 sponsors.

Registration for the event is open.