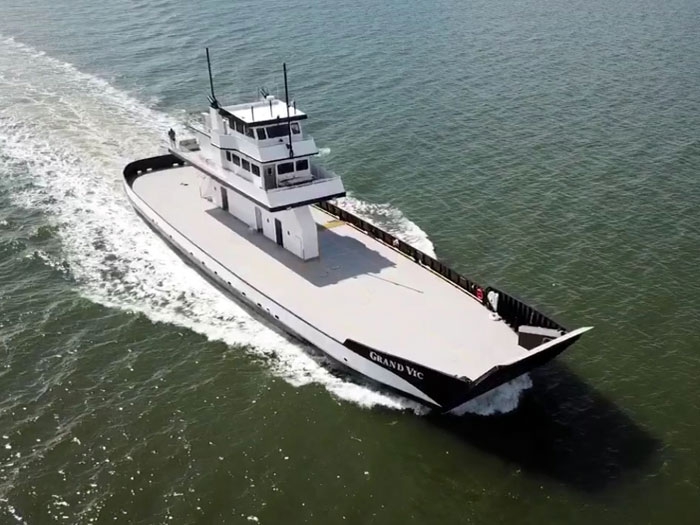 Built of all-welded steel, the ferry is built in accordance with the U.S. Coast Guard Subchapter T regulations for small passenger ferries under 100 gross tons carrying no more than 150 passengers on a Lakes, Bays & Sounds Route.

The 160 ft Grand Vic has a beam of 43 feet, depth of 11 feet, and passenger capacity of 149. Propulsion power is supplied by two Mitsubishi S6R2-Y3MPTAW diesel engines, which are rated at 803 hp at 1,400 rev/min. The engines drive two 54 in by 53 in bronze propellers via two Twin Disc MGX6650 marine gears with a 2.5:1 ratio and Aquamet 17 shafting. Hydraulic steering is supplied by Gulf Coast Air & Hydraulic. The ferry has a cruising sped of 13 knots and maximum speed of 16 knots.

All of the main engines and generators have Gridcooler keel coolers.

Steiner Shipyard is also busy with several vessels for the inland waterways. “As of right now,” says Angelini, “we have two pushboats under construction. We have one 100 ft Tier III pushboat for FMT and one 120 ft Tier III pushboat for Southern Towing Company. We are also looking at finalizing contracts for a series of 88 ft pushboats in the next few days. Construction on these vessels will start early next year.”