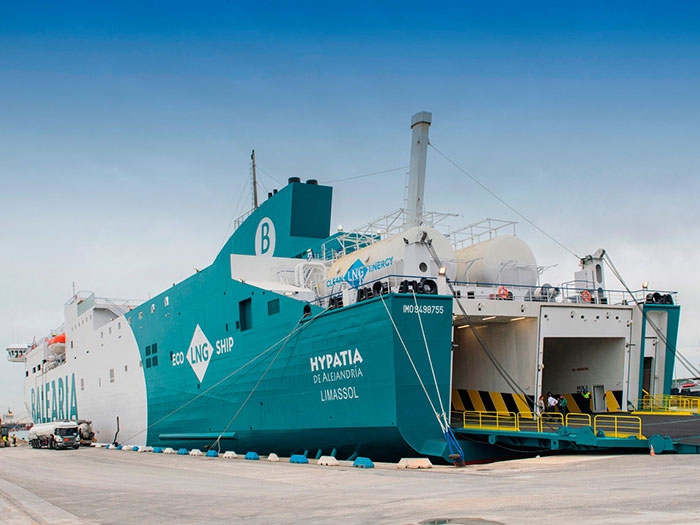 The ferry reached the Port of Barcelona last Sunday from Venice where the shipyard Cantiere Navale Visentini, where it was built, is located.

Baleària says that, in addition to being LNG fueled, Hypatia de Alejandría is also the company’s first smart ship. Innovations include the digitization of all signage, access to cabins without having stop at reception (with the use of a QR code received by customers on their mobile phones) and a camera system in the pet area that allows passengers to monitor pets through their smart phones.

Smart technology is also enhancing the vessel’s energy efficiency with a shore-based system currently being implemented to monitor the entire propulsion system to guarantee optimal operation and detect and resolve possible incidents remotely.

The 186.5 m long ferry has a capacity for 800 passengers, 2,194 linear meters of cargo space and room for 166 vehicles. It has three passenger seating areas (two standard and one premium) equipped with reclining seats and 120 cabins with capacity for up to four people, all equipped with full baths, air conditioning, Wi-Fi, a smart TV and a digital entertainment system as well as two cabins for people with reduced mobility. The Hypatia de Alejandría also has a shop, café, self-service and a-la-carte restaurant in addition to Jacuzzis on the outside deck.

In addition to the Hypatia de Alejandría, and its twin Marie Curie, Baleària has also placed an order with the Armon shipyard in Gijón, Spain, of the Eleanor Roosevelt, the first passenger/cargo fast ferry to be powered by dual natural gas engines.

Additionally, six of its existing ships are being retrofitted to operate on LNG 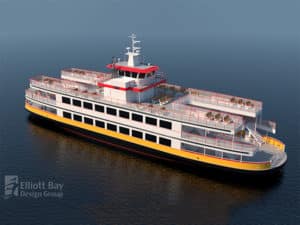 […] Spanish ferry operator Baleària reports that the Marie Curie, its fourth LNG fueled smart ship will enter service on its Valencia-Ibiza-Palma route from Friday, July 26. The ship is a twin of the Hypatia de Alejandría, which at the beginning of the year became the first vessel to operate on LNG in the Mediterranean (see earlier story). […]