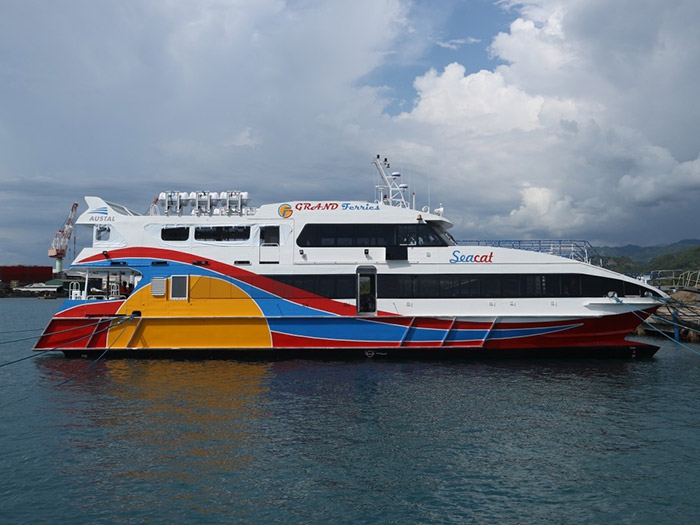 Austal Philippines has delivered Hull 420, a 30 m high speed catamaran named MV Seacat to VS Grand Ferries of the Philippines

SEPTEMBER 12, 2018 — Austal Limited (ASX: ASB) reports that its shipyard in Balamban, Cebu, has delivered a 30 m high speed aluminum catamaran to VS Grand Ferries of the Philippines. Designed by Incat Crowther, the new MV Seacat can carry up to 300 passengers at speeds up to 25 knots.

The A$5.5 millon (about US$4 million contract was awarded to Austal in August 2017 with construction commencing in September 2017. The project met every milestone on time and on budget and the ferry is the first locally operated vessel to be built to achieve the Philippines Maritime Industry Authority’s Pioneer enhanced safety standard rating.

“Austal Philippines has developed into an established and very successful shipyard that has produced high quality vessels for the worldwide market since 2012,” said Austal CEO, David Singleton. “Austal has been proud to be leading this sovereign industrial capability development for the Philippines.”

“Our Philippines facilities employs more than 500 highly skilled local employees in a broad range of professional, technical and trade roles,” he added. “Austal Philippines has been responsible for developing the local SME industry and supply chain whilst also collaborating with local universities and educational establishments to truly develop a sovereign industrial capability for the Philippines.”

In the last two years Austal Philippines has delivered six high-speed commercial vessels at increasing rates of efficiency whilst maintaining Austal’s standard for excellence. Austal Philippines is currently constructing modules for a 109 m next generation high-speed catamaran for Fjord Line of Norway, the largest aluminum passenger ferry to be built in the Philippines. The vessel will be completed in a new purpose-built 120 m long assembly facility, the shipbuilder’s largest outside the U.S. The new facilities are under construction and on track to be completed in early 2019.