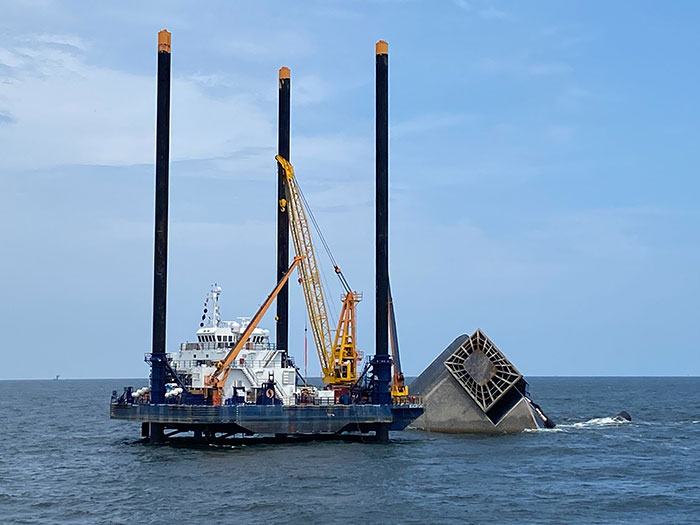 U.S. Coast Guard Eighth District reports that Donjon-SMIT salvors have brought the bow section of the capsized liftboat SEACOR Power to the surface. It was transported by barge on Saturday to the Modern American Recycling Services, Inc. facility in Houma, La.

Meantime, photos of parts of the vessels being brought on shore have been posted on Facebook by Gulf Coast Humanitarian Efforts, a 501(c)(3) registered non-profit chaired by Mr. Scott Daspit, father of one of the men missing since the liftboat capsized on April 13.

All but six of the crew of 19 aboard the vessel died or are presumed dead.

Eighth District says that safety remains paramount. The unified commander is closely monitoring the weather and adjusting operations as needed to ensure the safety of salvage crews.

The Coast Guard safety zone extending one nautical mile around the site and the Federal Aviation Administration temporary flight restriction covering a five nautical mile radius around the wreckage site and 2,000-foot minimum altitude will remain in place until salvage operations are complete. Additionally, a temporary flight restriction is in place around the M.A.R.S., Inc. facility.  These restrictions are in place to ensure the safety of salvage crews working at the wreckage site and the M.A.R.S., Inc. facility as well as boaters who could place themselves in danger by transiting through an active work site where debris and other underwater obstructions such as anchor wires, mooring ropes and navigational buoys may be present.