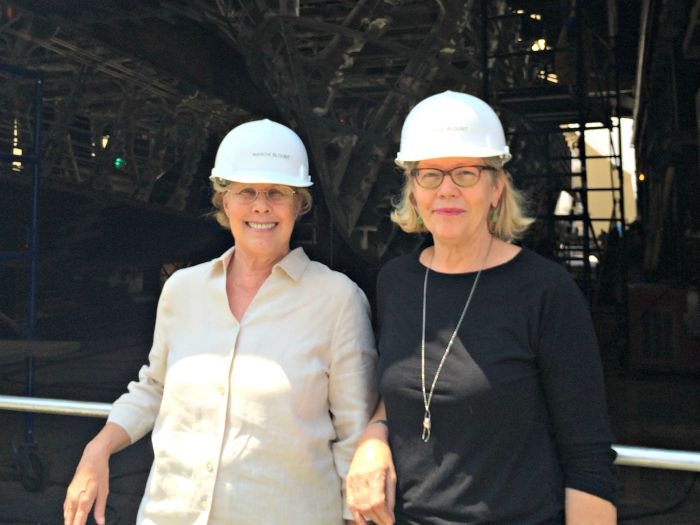 JULY 19, 2015—Work is well underway at Blount Boats in Warren, RI, on what will be the first U.S.-flag vessel built for the U.S. offshore wind farm market.

The 21-meter-long aluminum catamaran vessel is being built for Rhode Island Fast Ferry and will operate for Block Island Wind Farm in Rhode Island. The five turbine wind farm, the first commercial wind farm in the U.S., is expected to be up and running by the fourth quarter of next year.

The catamaran is a Crew Transfer Vessel (CTV) based on a design licensed from South Boats (IOW), Isle of Wight, the U.K., one of the leading designers and manufacturers of wind farm vessels in Europe. South Boats IOW has designed and built some 85 CTV’s for the European offshore wind sector.

Being pioneers and innovators is nothing new to Blount Boats. Yankee ingenuity is part of Blount’s DNA.  “My father just wanted to know what the problem was and then he’d come up with the solution,” Marcia Blount, President, Blount Boats told Marine Log on a recent visit to the shipyard. “We’re known for our iconic designs,” she added.

The founder of the shipyard, the late Luther Blount, was known for his innovative approach to complex problems and can-do attitude. He founded Blount Marine in 1949 and built over 300 vessels in his lifetime, including the Botruc series of special 65 ft offshore oil rig tenders for the early days of the Gulf of Mexico oil patch. The first Botrucs were built for the Cheramie Bros., Golden Meadow, LA (now L&M BoTruc Rentals, Inc.). Blount delivered the first Botruc to Cheramie Bros. in 1956. The Botrucs were designed as the pick-up trucks of the Gulf of Mexico, being among the first of the cabin-forward steel constructed offshore supply vessels ever built. You can still see the echoes of those designs in modern offshore service vessels. Mr. Blount held 22 patents at the time of his death at age 90 in 2006.

In a way, the new 21m CTV brings Blount back to its “roots.” Some of the first vessels built by the shipyard in the early 1950s were catamarans, including the 1952-built Twintube, a 64 ft 10 in gasoline and light fuel tanker sold to the Staten Island Oil Co.

“The crew transfer market is perfect for us,” pointed out Julie Blount, Executive Vice President, Blount Boats. Blount Boats’ 21.5m wind farm vessel will be dual certified to USCG Subchapter T (Small Passenger) to carry up to 49 passengers and subchapter L (Offshore Supply Vessel) to carry up to 16 offshore workers.

Propulsion power for the aluminum cat will be supplied by two MAN V12-1200CR main engines that will produce 1,400 hp at 2,100 rev/min and drive two HamiltonJet HM571 waterjets via ZF Marine 3050 marine gears.  The vessel is estimated to reach sprint speeds in excess of 28 knots, with the ability to cruise (80% power) at 27 knots when in a light condition and 23 knots in loaded condition.

A Cummins Onan 17kw generator will provide AC power to the air conditioning system, a heating system and small galley. A PTO driven hydraulic system will power a deck crane, the fire pump, a fuel transfer pump, and a salt water pressure washing system. All other equipment will be fed DC power through house batteries.

The bow has a bow boarding/loading platform to allow offshore workers to make the transition from the vessel to the wind turbine.  The vessel connects to the turbine base by use of a special bow fendering system.  The specified fender is the latest generation in proven fendering systems being installed in the European fleet.  The vessel will be capable of making transfers in 1.5m significant wave heights.

The interior of the deckhouse will be outfit with a head, a small galley area with settee seating, 12 suspension seats, storage lockers, entertainment system, Wi-Fi, and sound absorbing decking. The entire deck house is isolated from the hull with vibration mounts for a quieter and smoother ride to and from the work site.

Delivery is set for April 1, 2016, with the CTV entering service by May of that year.

The CTV isn’t the only activity at Blount Boats. The Rhode Island shipyard recently quietly completed a series of 25 fifty-three foot-long crewboats based on a Damen design over a two year period for an undisclosed customer. “It was a new experience for us because we hadn’t had an opportunity to build a series of boats of that magnitude,” says Marcia Blount. “We got quite good at it.”

Work is also progressing on a 79 ft x 23 ft double hull steel bunker fuel tanker for American Petroleum & Transport, Inc. Designed by naval architects Farrell & Norton, the Chandra B will have a cargo capacity of 56,450 gallons and will operate in New York Harbor and New Jersey. Delivery is set for this August.

It also fabricated a module in support of a boat construction project at Gladding Hearn Shipbuilding, A Duclos Corporation, in nearby Somerset, MA.

The U.S. Coast Guard recently established a 500-yard safety zone around each of five locations where the Block Island Wind Farm (BIWF) wind turbine generator (WTG) foundations will be constructed in the navigable waters of the Rhode Island Sound, RI. The safety zone will be in effect from July 16 to September 30, 2015.

These safety zones are intended to safeguard mariners from the hazards associated with construction of the BIWF WTG foundations. Vessels are prohibited from entering into, transiting through, mooring, or anchoring within these safety zones while construction vessels and associated equipment are present, unless authorized by the Captain of the Port (COTP), Southeastern New England or the COTP’s designated representative.