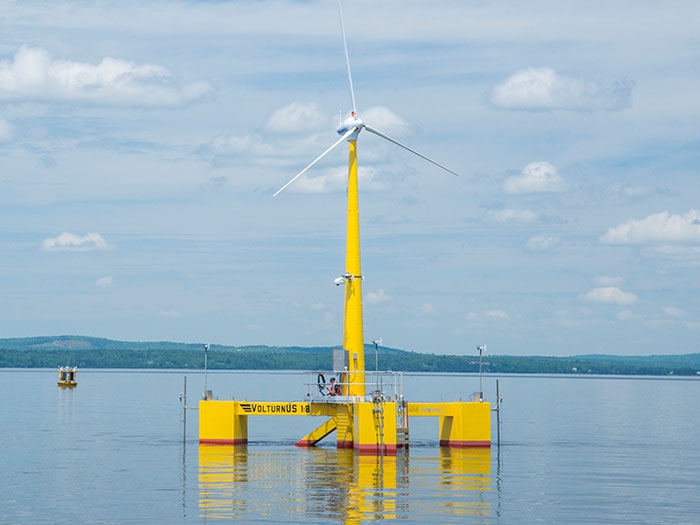 The UMaine-developed, patented VolturnUS floating concrete hull technology can support wind turbines in water depths of 45 meters or more, and has the potential to significantly reduce the cost of offshore wind

SEPTEMBER 14, 2017 — ABS, has completed the design review of the Front End Engineering and Design (FEED) documentation for the VolturnUS floating offshore wind turbine concept developed by the University of Maine (UMaine).

“ABS has been the leading classification organization for the offshore industry from the very beginning of offshore operations, and we are pleased that the renewable energy industry is now looking to ABS for FOWT design review,” says ABS Executive Vice President for Global Offshore Ken Richardson. “ABS was the first classification organization to work offshore and continues to be a pioneer in setting standards for safety and excellence.”

The patented VolturnUS, developed by the Advanced Structures and Composites Center at the University of Maine is based on a concrete four-column semi-submersible hull concept. In 2013, the UMaine team successfully tested the feasibility of the concept by developing a 1:8 scale model and deploying it offshore Maine.

The current pilot project consists of two full scale semi-submersibles, each with a 6 megawatt turbine that are designed to be on site for 20 years. Both units will be connected to the Maine power grid by subsea cables.

“UMaine is pleased that its innovative design became the first floating wind turbine concrete semisubmersible hull to be reviewed by ABS, and found to meet the ABS requirements,” says UMaine Director and Principal Investigator Dr. Habib J. Dagher. “After 10 years of development, this is a major milestone for our program, and we expect the VolturnUS hull concept to continue to attract private investment from the U.S. and around the World. Nearly 70% of the U.S. offshore wind resources can be captured using the UMaine VolturnUS technology, and we are looking forward to working with offshore wind developers across the U.S.”

Plans are in place for the semi-submersibles to be used for the New England Aqua Ventus I project, a 12 megawatt facility offshore Maine funded by the U.S. Department of Energy. According to UMaine, this is a pilot project to demonstrate that the innovative design of the VolturnUS is a viable and economical alternative for offshore wind developments in water depths greater than 50m.

“ABS worked closely with the University of Maine through all design phases of the Aqua Ventus project,” says University of Maine Engineering Manager Anthony Viselli. “We are excited about the positive results from the design review and the potential for deploying this technology elsewhere in the U.S. and abroad.”

The UMaine-developed, patented VolturnUS floating concrete hull technology can support wind turbines in water depths of 45 meters or more, and has the potential to significantly reduce the cost of offshore wind