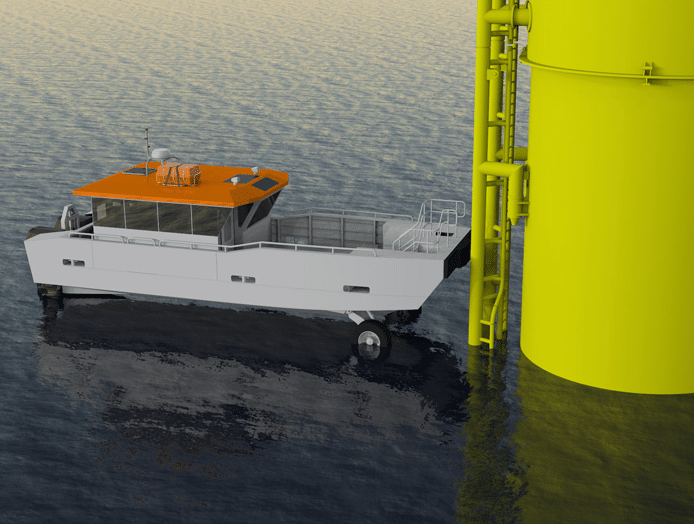 Although it was announced earlier this year, the “world’s first” amphibious crew transfer vessel (CTV) is rapidly approaching the completion of its fabrication phase.

RWE has been wrestling for several years with the difficulties of ever-changing sand banks restricting access to its Scroby Sands Wind Farm. Aston Goddard of RWE challenged its specialist shallow-draft CTV provider CRC to find an innovative solution.

CRC Walrus is a 12-meter type approved crew transfer vessel with seating for two crew and eight passengers. There is a 750 kg deck cargo capacity and the usual bow transfer system. Service speed is 23 knots with a sprint speed of 29 knots

CRC Walrus will transition from sea going to amphibious by lowering three hydraulically operated oversized wheels steered by a single nose wheel allowing her to “dock” with the turbine ladder. The hydraulic system is powered by a generator.

Stuart Hedges of Commercial Rib Charter says, “The collaborative approach we have taken has helped mitigate the risk on such a technically innovative project. Working with highly competent marine architects and a boat builder steeped in experience has not only produced an excellent design but has done so to both budget and timetable. We signed the build contract with Diverse Marine in December [2021], and we plan to be operational at Scroby in September this year.’’

Aston Goddard of RWE, who was himself a former CTV skipper on the wind farm is full of praise for the project. ‘’For many years we have trialed and tested various operational approaches to allow us to maintain continuous access to our turbines despite a rising seabed. Through the incredible support of both the internal RWE team and Commercial Rib Charter a bold and innovative vessel design has entered build which will deliver a step change in operational efficiency.’’

Ben Colman, managing director of Diverse Marine, commented: “On behalf of the team at Diverse Marine and our U.K. supply chain I am delighted to have signed this contract with Stuart Hedges and Commercial RIB Charter. We have enjoyed a good relationship with Stuart and his operations team for over five years, supporting his existing CTV fleet and now adding CRC as a new construction partner. It is also great to be building this vessel for the Scroby Sands Offshore Wind Farm as we worked with the team there to build their last bespoke CTV Eastern Aura, now owned by CRC and named CRC Vulcan.

“Diverse Marine has a passion for the development of new technology that can be implemented in different market sectors and has a solid, proven track record of successfully delivering these projects in conjunction with many clients and supply chains. This amphibious CTV is in good company and one we are super keen and grateful to be involved with. The team will take a very active role in configuring the vessel for its role at Scroby Sands.”

Andy Page of Chartwell Marine commented: “For Chartwell Marine, this project represents another great opportunity to provide an innovative solution to a difficult challenge. We have been designing boats for offshore wind for over 10 years now and as such have fond memories of running out the pier heads in Great Yarmouth to Scroby Sands. I think almost all the vessels that we have been involved in on the east coast have been tested there. RWE have always been very receptive to new ideas and have let us trial a number of concepts over the years including but not limited to novel bow fendering/ transfer solutions.

“This boat is a clear example of that, and represents a coming together of ingenuity and engineering capability between site manager, vessel operator, designer and builder. We are hugely grateful to Stuart and CRC for bringing us into the consortium and are looking forward to the build of the boat with the rest of the team.”

Meantime, Chartwell Marine has a number of commercial, offshore wind, and leisure projects in the works around the globe.

The company recently launched a new offshore vessel range that it announced in June. The new design range, spanning classes A to D, applies Chartwell’s proven formula of performance and excellence in offshore energy support vessel (OESV) design to accommodate the growing variety and complexity of offshore energy requirements. Vessels across the new range are already in build at yards in Europe and the U.S., as the business responds to demand from established and emerging offshore wind markets. 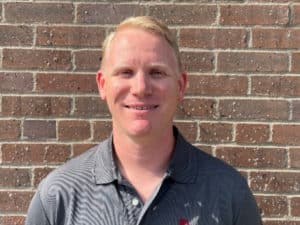 The Shearer Group adds to team 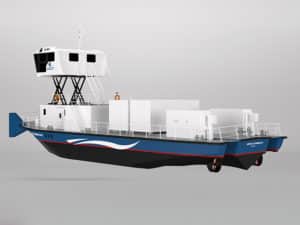 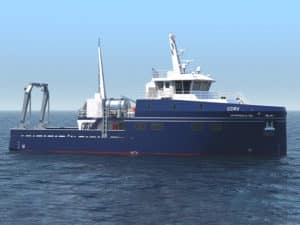 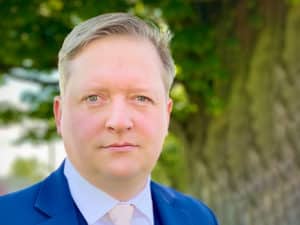