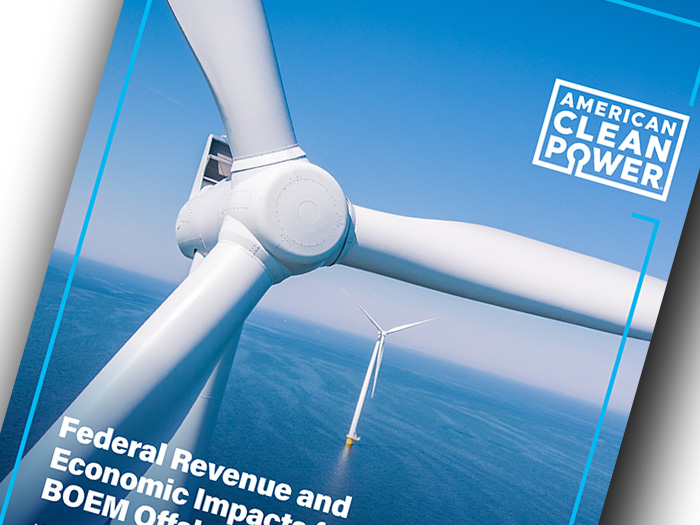 A new report released by the American Clean Power Association (ACP) indicates that expanded offshore wind leasing in the United States could generate up to $4.5 billion in new federal revenue, create up to 128,000 jobs during construction of the projects, and spark $120 billion in clean energy investments.

ACP conducted its analysis following the October announcement by the Bureau of Ocean Energy Management (BOEM) of plans to schedule seven new lease auctions by 2025, including the New York Bight, Northern and Central California, Carolina Long Bay, Oregon, the Gulf of Mexico, the Gulf of Maine, and the Central Atlantic.

“This report shows the power and potential of the growing offshore wind industry. Harnessing America’s offshore wind resources will create tens of thousands of highly-skilled jobs, revitalize coastal communities, and deliver vast amounts of reliable clean energy to our biggest population centers,” said ACP CEO Heather Zichal. “We hope its findings will inform discussions around the beneficial use of BOEM revenue, as well as efforts to establish a more durable and predictable leasing and project pipeline.”

Entitled Federal Revenue and Economic Impacts from BOEM Offshore Wind Leasing, the study estimates BOEM revenue and economic impacts from execution of BOEM’s Offshore Wind Leasing Path Forward 2021-2025 roadmap. ACP estimates that leases sold at these auctions will support between 23 gigawatts and 40 gigawatts of new offshore wind projects. The construction of these projects would be expected to support between 73,000 and 128,000 jobs, and an additional 28,000 to 48,000 jobs in operations and maintenance roles, in the supply chain, and in surrounding communities for the life of the projects.

The report shows that lease auctions will open more areas for development to help meet demand for individual states that have set offshore wind procurement targets, meet the federal goal of deploying 30 gigawatts of offshore wind by 2030, and provide regulatory certainty that will spark supply chain investments and clean energy job growth.

BOEM could expect to accrue revenue both from the sale of the leases and the long-term rents and operating fees paid by projects developed in those areas. ACP estimates that if BOEM opened between 6,600 and 11,400 square kilometers of area across the seven regions, it would generate between $1.6 and $2.7 billion in lease sale revenue over the next four years and an additional $1.1 to $1.8 billion in rents and operating fees for a total of $2.7 to $4.5 billion in new revenue over the coming decades.