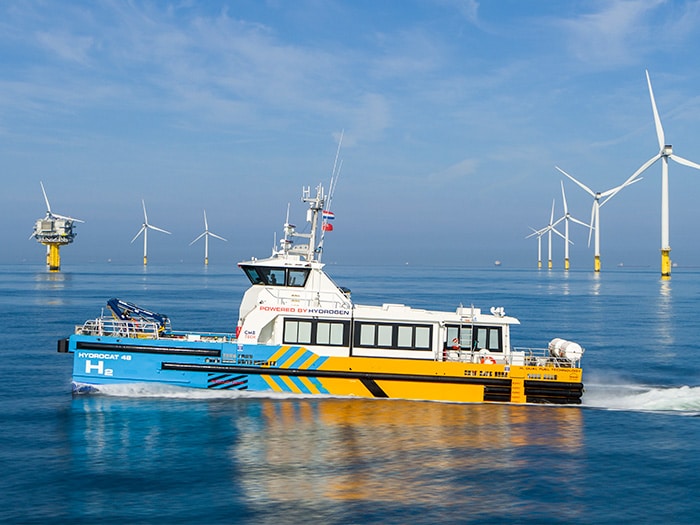 MAN Engines reports that it has put its first two dual fuel hydrogen-powered engines for work boats into serial operation. The two twelve-cylinder MAN D2862 LE448, diesel engine each have an output of 749 kW (1,019 hp) at 2,100 rpm.

The low-emission engines will be used in the world’s first hydrogen-powered crew transfer vessel (CTV), the Hydrocat 48 operated by Windcat Workboats, which is owned by Compagnie Maritime Belge (CMB), long an advocate of hydrogen as a marine fuel.

The engines are IMO Tier III-certified and equipped with a selective catalytic reduction exhaust gas aftertreatment system. Both V12 engines have been prepared for dual fuel operation by MAN Engines, and supplemented with a hydrogen injection system by development partner CMB Tech.

“What’s special about our technology is that we use a conventional diesel engine, which doesn’t need to be optimized for hydrogen,” says Werner Kübler, head of development at MAN Engines, which is part of MAN Truck and Bus SE. “A proven V12 marine engine is thus used in which hydrogen is introduced into the charge air via an adapter and is added to the combustion cycle. The combustion process is thereby started according to the diesel principle, which requires the injection of approx. 5% of diesel fuel. The diesel fuel common rail injection parameters have been optimized here for dual fuel operation.

“MAN Engines has long-standing experience in the development of fuel-saving and reliable diesel engines, including for work boats,” adds Kübler. “Building on this experience, we were also able to achieve the best consumption values in dual fuel operation, and ensure the same operating behavior as displayed by diesel operation at full load. At the same time, we also reduce CO2 emissions through the use of hydrogen by an average of approx. 50%, and even up to 80% as a peak value.”

A further advantage of using the conventional but sophisticated diesel engine is the familiarity and ease of maintenance and service, says MAN Engines. Additionally, pure diesel operation can continue without interruption if the hydrogen supply is exhausted.