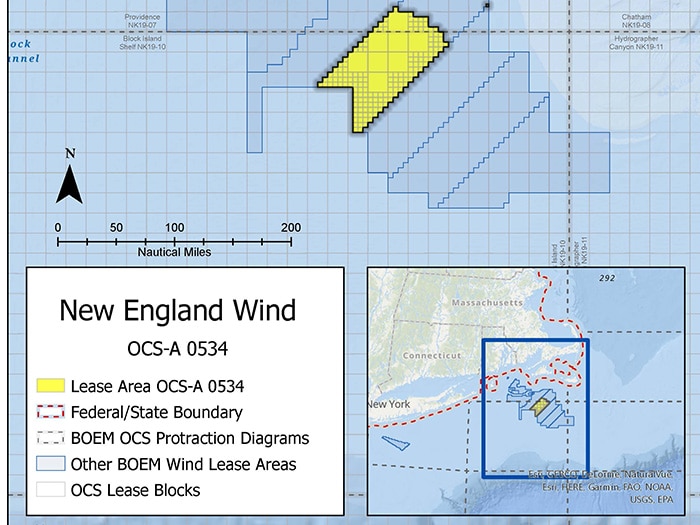 The Bureau of Ocean Energy Management (BOEM) has announced the availability of its draft Environmental Impact Statement (EIS) for the proposed New England Wind energy project offshore Massachusetts. If approved, this proposed 2,600-megawatt project could provide power for more than 900,000 homes.

Under the Biden Administration, BOEM has initiated the environmental review of ten projects, with more to come. Of these, New England Wind represents the sixth project to reach the DEIS stage of review by BOEM. In addition to today’s action, the Department of the Interior has approved the nation’s first two commercial scale offshore wind projects and has held three offshore wind lease auctions. Other milestones achieved in 2022 include the identification of two final Wind Energy Areas in the Gulf of Mexico and eight draft Wind Energy Areas in the Central Atlantic.

The New England Wind draft EIS can be found on BOEM’s website, and the notice of availability will publish in the Federal Register on Dec. 23, 2022, which will open a 60-day public comment period that ends at 11:59 p.m. ET on Feb. 21, 2023. The input received via this process will inform preparation of the final EIS.

“For two years, the Biden-Harris administration has worked diligently to advance the U.S. offshore wind industry through executive action and meticulous permitting review, and that hard work is set to pay off in the next year,” said Liz Burdock, founder and CEO of the Business Network for Offshore Wind. “U.S. offshore wind was already primed for an historic year in 2023 with two commercial projects expected to continue construction – now, including New England Wind, BOEM could approve six more projects for construction, representing up to 11 GW in offshore wind capacity and enough to power nearly 4 million homes. An approved project pipeline of this size instantly makes the U.S. a top global market and will go a long way to supporting existing and driving new supply chain investments domestically.”