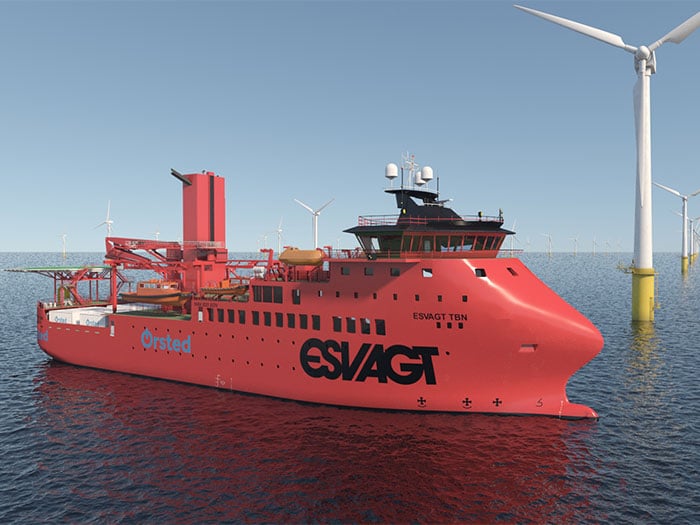 The 93 meter long and 19.6 meter HAV Design8 33 SOV will be powered by batteries and dual fuel and pure methanol engines

The world’s first green-fueled SOV, just ordered by Esvagt, will be built to a design developed by HAV Design, which will also deliver an integrated equipment package including propulsion system, engines, propellers and positioning system. The total contract value is approximately NOK 200 million (about $21 million).

Set to be commissioned by the end of 2024, the SOV will go to work for Ørsted servicing the world’s largest offshore wind farm, Hornsea 2, off the U.K.’s east coast.

It will be powered by batteries and dual fuel and pure methanol engines, capable of sailing on renewable e-methanol, produced from wind energy and biogenic carbon. Ørsted intends to supply the e-methanol for the vessel. Over the past two years, Ørsted has built up a portfolio of green fuel projects, three of which focus on producing e-methanol for maritime transport.

“Esvagt is very well familiar with the ship design and the operational benefits it brings,” says Gisle Vinjevoll Thrane, vice president of sales at HAV Design. “We are delighted with this this collaboration. We are aware of the high standards that ESVAGT requires from their suppliers and we use this as a benchmark to secure high-quality project execution, cost-efficiency and reduction of project risks to a minimum.”

“This is the tenth SOV that Esvagt is developing together with HAV Design,” says Kristian Ole Jakobsen, DCEO at Esvagt. “The long-term close cooperation with HAV Design will ensure the highest performance and efficiency, and always based on Safety First.”