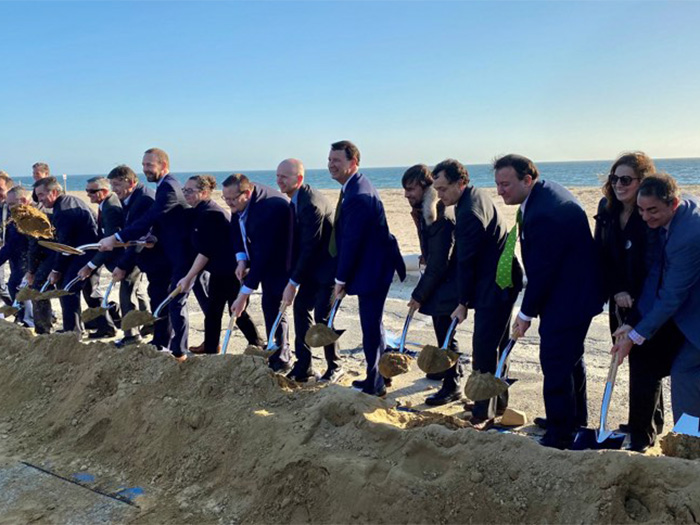 Construction of Vineyard I began with traditional groundbreaking ceremony/

A groundbreaking ceremony was held today to mark the start of construction of Vineyard Wind 1, the first large-scale offshore wind farm in the U.S. The project will be 25 times the size of the country’s only existing offshore facility, located in Rhode Island.

Vineyard Wind 1 will be operated by Vineyard Wind, a company 50% owned by the Iberdrola group through Avangrid subsidiary Avangrid Renewables and Copenhagen Infrastructure Partners (CIP).

The 800-megawatt (MW) project, located 15 miles off the coast of Martha’s Vineyard, will generate electricity for more than 400,000 homes and businesses in the Commonwealth of Massachusetts, create 3,600 full time equivalent (FTE) job years, save customers $1.4 billion over the first 20 years of operation, and is expected to reduce carbon emissions by more than 1.6 million metric tons per year, the equivalent of taking 325,000 cars off the road annually.

“Vineyard Wind 1 is on a par with the most ambitious offshore developments globally, including those developed by the Iberdrola Group. Not many countries have the ambition to launch their first project at a scale that will power 400,000 homes and create 3,600 jobs,” said Ignacio Galán, chairman and CEO of Iberdrola and Chairman of AVANGRID. “With 15 years of offshore wind leadership, Iberdrola and Avangrid are more than ready to help the US benefit from the substantial opportunities of offshore wind including economic investment and job creation. Our offshore developments in New England and North Carolina/Virginia could represent a total investment well above $15 billion in the coming years.”

The groundbreaking ceremony was held at Covell’s Beach in Barnstable, Mass., the site where two cables will make landfall and connect to the grid at a substation further inland on Cape Cod. It was attended by approximately 200 people, including Secretary of the Interior Deb Haaland, and Massachusetts Gov. Charlie Baker,

“Many people have worked extremely hard to make today possible, a day where we turn forward thinking into action,” said Vineyard Wind CEO Lars Pedersen. “From the environmental and community activists to our elected leadership at the local, state and federal level, it’s taken all of us, pulling in the same direction and not being deterred by setbacks both large and small. By focusing on our ultimate goal—developing clean, cost-effective energy that will cut carbon pollution and create thousands of jobs in the process – we never lost sight of what mattered most, and we ultimately have a better project as a result. I want to thank everyone for their commitment to and belief in this industry and look forward to celebrating many more milestones in the months ahead.”

“Vineyard Wind 1 represents a historic milestone for advancing our nation’s clean energy production. This project and others across the country will create robust and sustainable economies that lift up communities and support good-paying jobs, while also ensuring future generations have a livable planet,” said Secretary Haaland. “The Interior Department is committed to responsibly accelerating our nation’s transition to a clean energy future, and doing so in coordination with our partners, stakeholders, Tribes and ocean users to avoid and reduce potential impacts as much as we can.”

Under a Project Labor Agreement (PLA) with the Southeast Massachusetts Building Trades, the work being done on site is using local union labor. The PLA ensures that at least 500 of the jobs created during the construction phase of the project will be filled by local tradespeople and includes aggressive diversity hiring targets.

“Massachusetts is proud to launch an entirely new industry in the United States by building this historic, first-in-the-nation project, and by officially beginning onshore construction on the Vineyard Wind project, we are charting a new course for clean energy and climate action,” said Gov. Baker. “Vineyard Wind will provide enough affordable clean electricity to power 400,000 homes while creating hundreds of local jobs, and our Administration is focused on maximizing the economic opportunity for the Commonwealth by filing legislation that would direct a historic investment of $750 million to advance our ambitious climate goals and build the clean energy workforce of the future.”

The project will utilize 62, 13 MW General Electric Haliade-X wind turbines that will be connected to an offshore substation, where the power will be transferred to two export cables that will make landfall at Covell’s beach and connect to the grid at an inland substation. As a result of the cable laying, the Town of Barnstable and Vineyard Wind are collaborating on a long-awaited sewer improvement project, saving the town millions of dollars.