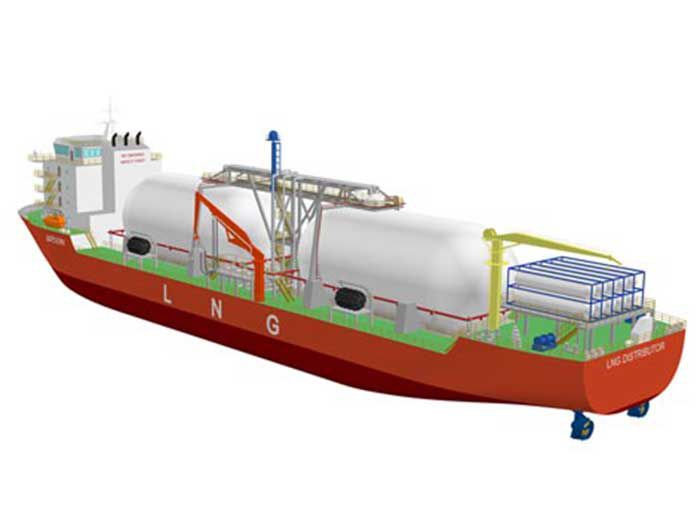 With scalable capacity between 5,000 to 20,000 cu, m, the LNG Distributor integrates the functions of LNG loading, bunkering and container delivery.

The AiP has been granted following validation of an LNGD design with a 10,000 cu.m storage capacity.

While conventional LNG carriers are designed to load, transfer and unload full cargoes between two terminal points, the LNG Distributor has been purpose designed to distribute partial loads to coastal areas in regions. Designed to operate at a shallow draft of 4.5 m, the LNGD can deliver cargoes in areas where LNG carriers with similar capacity cannot access. Its azimuth thruster propulsion system provides superior maneuverability, eliminating the need for tug assistance. The vessel features a bunkering arm, which facilitates a quick connection with the receiving facility and a short turn-around time. The loading arm will connect to the receiving unit’s manifold, thereby eliminating the need for a hose transfer system at each receiving point. In addition, the vessel has been designed with a large open deck, serviced by a crane. This area can be used to deliver general supplies and parts. Uniquely, the vessel has the ability to deliver full and pick up empty ISO containers for inland trucking. Empty containers can be filled onboard through a refill station.

Mr. Tangquan Man, Vice President at Wison Offshore & Marine who received the AiP on behalf of the company in a ceremony at the recent Marintec China event said, “This is truly wonderful first time cooperation with DNV GL who rendered us valuable support in the process. We are impressed with their technical know-how and profound interpretation of international standards. Our aim is to tap ‘last mile’ demand in global LNG market by facilitating penetration into smaller scale end markets where conventional marine logistics are unable to serve, and our LNGD concept is believed to be a tempting solution for such purpose.”