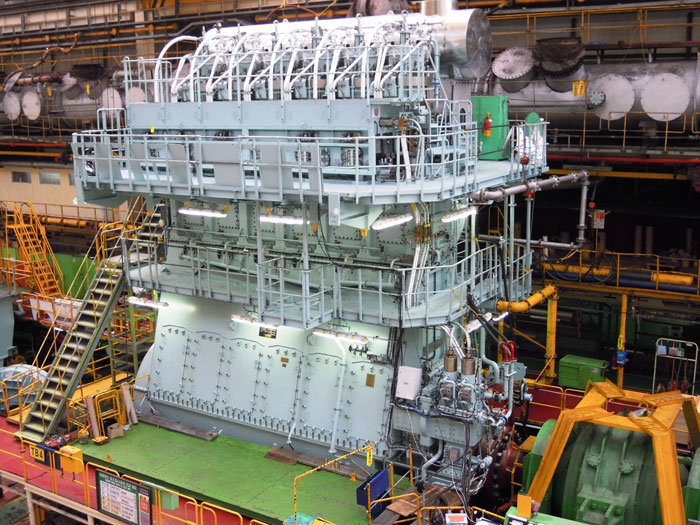 JANUARY 8, 2015 — Wärtsilä reports that the first Wärtsilä X62 two-stroke engine has successfully passed its design validation and type approval tests and has performed exceptionally well during the necessary sea trials. The engine is now ready for full market availability.

The Wärtsilä X62 is the latest in Wärtsilä’s X-Generation of engines introduced in 2012.  These engines have a high stroke-to-bore ratio, thus achieving a lower engine speed and reduced brake specific fuel consumption (BSFC).

The first Wärtsilä X62 engines to enter actual service will be used to power four 115,000 dwt LR2 product tankers being built for the Greek ship owner Kyklades Maritime Corp at the Gunsan shipyard of Hyundai Heavy Industries Co. in Korea.
These vessels will use the six cylinder version of the engine with a 12,360 kW nominal maximum continuous rating.

“The X62 is an important addition to Wärtsilä’s engine portfolio and a valuable answer to the marine sector’s need to increase fuel efficiency and minimize emissions,” says Martin Wernli, Vice President, two-stroke, Wärtsilä Ship Power. “Although the tests and sea trials have only recently been accomplished, we have already orders for 16 Wärtsilä X62 engines, which is a clear indication of the demand for fuel efficient and highly reliable machinery.”

The Wärtsilä X62 passed its Type Approval Tests (TAT) at Hyundai’s Ulsan engine works in October 2014. The TAT signals that the engine fulfils all classification society requirements. Sea trials were undergone in November 2014 aboard the tanker Nissos Therassia. The engine exhibited low overall vibration levels and the expected high performance levels throughout the trials and in the Unmanned Machinery Space (UMS) tests.