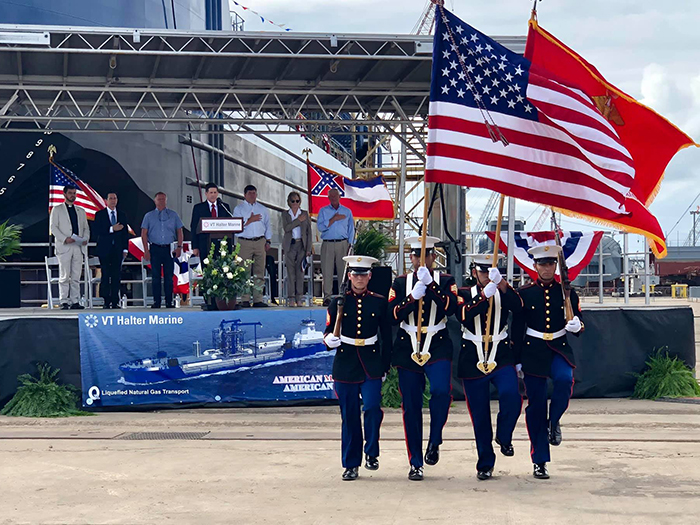 In November 2017, VT Halter Marine was awarded a contract by Q-LNG Transport to build the ATB LNG unit, which was announced as part of a long-term contract with Shell Trading (U.S.) Company, to deliver LNG as a fuel source to various ports in Florida and the Caribbean. It will bunker Carnival Cruise Line’s two new dual-fuel ships and two dual-fuel Siem Car Carrier pure car truck carriers chartered by the Volkswagen Group to transport vehicles from Europe to North America.

The LNG ATB Unit is designed to meet the requirements of American Bureau of Shipbuilding and the International Gas Carrier code as an LNG bunkering barge. Anticipated delivery of the first unit is in the first quarter of 2020.

“I have two reasons to be here today – these are the best shipbuilders on earth,” Palazzo said. “In this yard — in Jackson County, Mississippi – you build the best ships. I know what these shipbuilders, pipe fitters and electricians can do.

“My second reason is to stand up for the Jones Act. Ships must be built in America, owned by an American company, crewed by Americans under an American flag. That’s why we come here.”

Over the last four years, Jones Act ship operators have taken steps to transition their fleets to use cleaner burning fuels, including LNG. By designing and constructing the Q-LNG 4000, VT Halter Marine is on the cutting edge of technology. This barge is designed to provide ship-to-ship transfers of LNG to vessels that use LNG as a fuel source and also ship-to-shore transfers to small scale marine distribution infrastructure in the U.S. Gulf of Mexico and abroad.

“This vessel is good for the environment because it replaces diesel fuel with clean natural gas,” Wicker said. “This is part of protecting the environment. We have energy independence here in America. We can supply the rest of the world with the energy that is produced here.”

LNG bunkering is also advancing in other parts of the world, and the European Union is an early adopter,  Ronald Baczkowski, Chief Executive Officer of VT Halter Marine,  said.

“LNG fuel may be cheaper in the long run than conventional fuels, but LNG bunkering requires specialized infrastructure for supply, storage and delivery to vessels,” Baczkowski noted. “The Q-LNG 4000 is the first American offshore LNG bunkering barge, and the talented employees of VT Halter Marine constructed it here in Pascagoula.”

Hyde-Smith commented on the quality, dependability and pride she sees at the VT Halter Marine shipyard.

“When I am in D.C., I always say, ‘Let me tell you about the fabulous shipbuilders on the Mississippi Gulf.’ You are a key part of our national defense,” Hyde-Smith said. “I am confident of the quality of work that comes out of VT Halter Marine, such as this Q-LNG barge and the Polar Security Cutter that you are working on now. You give us plenty to brag about in Washington D.C.”

“No other company has an ATB this close to delivery,” said Shane J Guidry, Chief Executive Officer of Q-LNG Transport. “Q-LNG is focused and dedicated to deliver extremely safe transit to all the ports it will service, and we are committed to being a leader in the development of LNG infrastructure in the United States and abroad.”

“The significance of this vessel is that the shipbuilders of VT Halter Marine are delivering the next major development of the infrastructure for the cruise and commercial ship industries as they advance to cleaner and more efficient fuels,” Vecchiolla said. “These professional and dedicated have put their hearts and souls into building a vessel that will contribute to our nation for decades to come.”