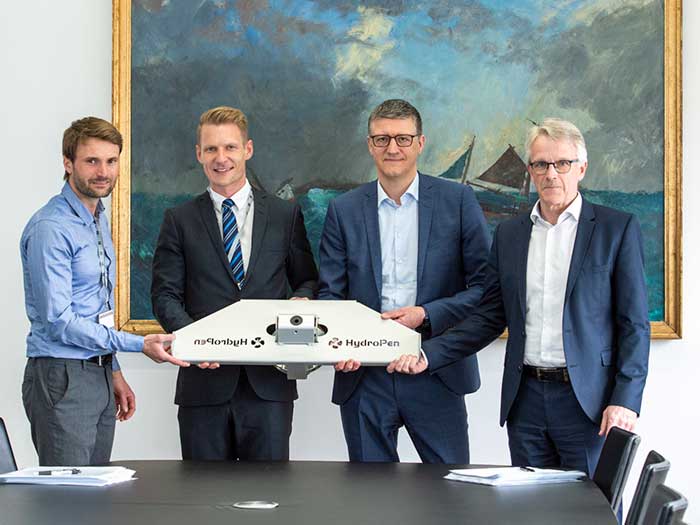 Viking Life-Saving Equipment has acquired HydroPen, the company behind the unique HydroPen container firefighting solution supplied to hundreds of ships.

HydroPens rapid uptake has been due to its combination of innovation, efficiency and ease of use. Attached to a ship’s hose and raised on a telescopic arm by a single crew member, water pressure alone powers its “drill and spray” nozzle to penetrate a container door before switching to spray mode to extinguish a fire with water, foam or CO2 – directly at its source.

HydroPen was founded in 2016 by Martin Winkel, CEO and Jesper Rosenfeldt Hansen, CTO and system inventor. Their inspiration was to apply innovative, safe and user-friendly technology, to revolutionize firefighting on board container vessels.

Around the same time, the need for new solutions was on the rise across the industry. Nine major containership fires were reported in 2019, followed by ten incidents in 2020, while the leading transports and logistics insurer, TT Club estimates that a container fire occurs on average once every 60 days. The International Union of Marine Insurance has called for ship design and fire-fighting equipment improvements on ultra large container ships.The acquisition also follows a fire in April onboard a 4,200 TEU containership off Malaysia, which called 50 local firefighters into action after the vessel returned to anchorage.

“This is a significant acquisition for Viking and for safety in the container shipping industry,” says Lasse Boesen, senior product manager, Viking. “We approached the HydroPen originators shortly after the system won the 2017 Danish Tech Challenge accelerator prize. From its official launch at SMM 2018, Viking became HydroPen’s exclusive distributor, going on to support orders from some of the industry’s biggest names.”

“Once crews familiarize themselves with HydroPen, there is no going back – and since its introduction, the system has already proven itself in live firefighting situations. Recently, HydroPen has also generated interest among land-based fire-fighting operators who have been quick to recognize its value,” adds Boesen.

“We are integrating HydroPen into our portfolio, in another evolution of our full scope strategy for marine safety,” says Henrik Uhd Christensen, CEO, Viking. “The HydroPen system meets a specific and widespread industry challenge and safety concern while aligning with Viking’s role as an innovation leader and trusted safety partner, as also demonstrated by the system winning the Safety at Sea Award for Best Safety Product, Fire-fighting.”

Both HydroPen’s Martin Winkel and Jesper Rosenfeldt Hansen say they are happy to see Viking carry the baton forward on bringing the HydroPen system to market.

“Viking and HydroPen have enjoyed an exceptional spell of cooperation from day one” says Winkel. “Driving innovation at the service of saving lives is at the core of what we’ve wanted to achieve with HydroPen and we are confident that our innovation will be safe with Viking. Together we have successfully positioned the HydroPen system as the most innovative container firefighting technology in the industry and we can’t wait to follow the journey ahead, both as active stakeholders in the transition period and beyond.”